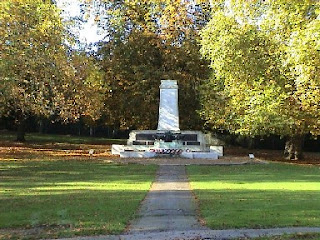 I will be attending the service in Christchurch Park, Ipswich in the morning, I thought of attending the Cenotaph service in London and joining the large contingent of ex Green Jackets - but no it will be Ipswich.

My father attended the service in the park every year, for many of them carrying the Korea Veterans Flag, so I will also be remembering my father.

Ipswich may not be a military town like Colchester but we have always been surrounded by RAF and USAF bases and now we have the Army Air Corps and Royal Engineers living close by, many of whom have now purchased houses in the town and think of Ipswich as their home- many of these have been or will be going back to Iraq and Afghanistan.

It is also even more important this year for the people of Ipswich to remember those who given their lives for their country as we have lost one of our own, Private Aaron McClure, one of nine Royal Anglians who have died with the this year in the Helmund Province.

We should never forget those who served us in both World Wars or in the conflicts since, if you cannot attend a Remembrance service in the morning, just take two minutes at 11 o'clock in the morning to remember those brave men and women who continue to serve this country in places such as Iraq and Afghanistan.