Empty houses- why build flats when you have empty houses to fill? 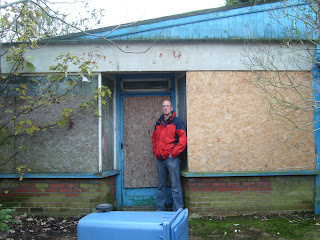 Alasdair outside 68 Rushmere Road, Ipswich
Still on the subject of my last post- the Tories seem hell bent on putting as many flats up on brownfield sites in Ipswich- just to protect certain parts of the town where they never wish to see any building.
I have heard that there is a plan to build houses on the Bisto's site on Woodbridge Road - if so that is good news, as we feared more flats. We will keep you informed.

But why build flats when close to our Rushmere Ward we have two empty houses that would make great family homes. Not only that, whilst they lay empty they are a magnet to vandals and louts.

We have the large house on Colchester Road (next to the Shell garage) and the old sweet shop at 68 Rushmere Road. The house next to the garage was raided by the police last year as it was being used as a drugs den. No such trouble at 68 Rushmere Road but it is very unsafe and a hazard to neighbours. The back garden fence is almost falling down and it just looks an eyesore.

I have been asking Ipswich Borough Council through my Labour colleagues to deal with this building as a matter of urgency and still nothing has been done. Do not worry, I will not give up and I hope to be able to bring you good news on 68 Rushmere road in the next few months.
Posted by Alasdair Ross at 21:09

Quite right. Even if new builds are needed there's no excuse for leaving so many properties derelict

Do you know you actually owns the place? Looks like a good challege to refurbish the place to develop into a nice home for someone!?