Munich 1958- Remembered with honour by the fans. The fans betrayed by the owners.. 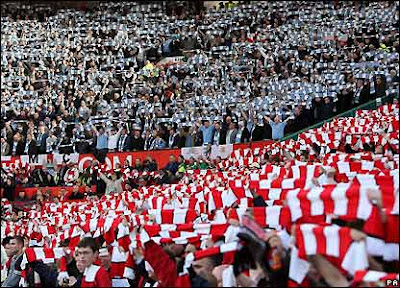 As fans of Manchester United and Manchester City remembered those who lost their lives tragically in the 1958 accident with honour the greedy owners of the Premier League are about to betray the name of English football with a mad cap idea of playing a 39th game for each team in places like Tokyo.
It seems ironic that today to show what football means to the people of this country one of the first acts of remembrance was for United and City to play with no sponsors names on their shirts, on top of that old style scarves were given to supporters- no modern merchandise. these pictures would have been transmitted all over the world and only further enhancing the good name of English football. whilst at the same time, club owners including the Americans at Old Trafford are selling the soul of the game. Club and FA administrators were worried that a few so called supporters may have ruined the minutes silence, the FA should have been more worried about Richard Scudamore at the Premier League and the 20 club chairman, who in one week have done more damage to the national game than a few fans not remaining silent would have.
Posted by Alasdair Ross at 20:18