Do nothing from the 'Do nothing' party 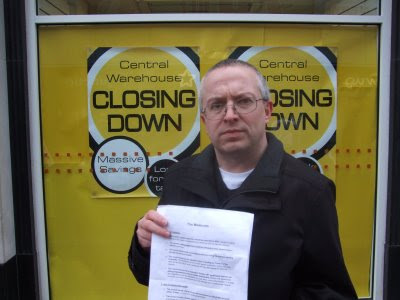 Not only are Cameron and his cronies doing nothing but even here in Ipswich the Tories (with help from their Lib Dem puppets) are also intending on doing nothing to help Ipswich during this recession.Now you may think that it is easy for us to say as we are in opposition, but we have produced our own budget proposals and there is no doubt that these proposals would do far more for the people of Ipswich and the businesses who employ them.

Ipswich Borough Council’s 2009 budget does the bare minimum to help people struggling to cope with the economic down and is a “massive missed opportunity”.
Labour councillors had called for a “Budget for Jobs” and published a list of 27 measures they wished the council to introduce in its budget.
While the council has introduced some measures that Labour called for, such as investing in the University, most of the help for Ipswich residents and businesses has been ignored such as:
1. An expanded programme of home insulation
2. Waiving Business Rates to bring empty shops back into use
3. Introducing “local labour clauses” into council contracts to give work to local people
4. A freeze on bus fares
5. Passing on the Government’s VAT cut
6. More help to keep people struggling with mortgages in their homes

· Cutting grants to voluntary organisations by £30,000
· Hitting Ipswich Town FC’s finances by increasing football parking charges
· Cutting the opening hours at Sports Centres and the Corn Exchange
· Cutting help to reduce abandoned vehicles at a time when scrap metal prices have plummeted which will lead to more abandoned vehicles
· Putting people’s health at risk by increasing charges to remove asbestos

Labour Leader David Ellesmere said: “The council has turned its back on its responsibilities to Ipswich businesses and residents who are struggling in the economic downturn. It is worse than ‘do nothing’ - some of what the council is planning will actually make things harder for the people of Ipswich.”
Posted by Alasdair Ross at 09:11