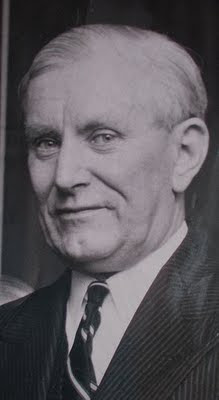 Last night saw the Ipswich Labour Group Christmas Dinner, and it was an opportunity to listen to some of my older comrades as they talk about earlier political battles in Ipswich as we are about to again start an election year.
Ipswich has a great Labour tradition often going against the national trend and voting in a Labour MP, and Chris Mole is following in a well trodden path to Westminster, with well liked Labour MP's going before him - Dingle Foot (pictured), Ken Weetch and Jamie Cann.
I am currently reading a short history of the Labour Movement in East Anglia - (Labour in the East, published by Labour Heritage)The chapters on Ipswich and Lowestoft are fascinating and it does make me proud to think that I am part of this great Labour tradition in this town.
The chapter by the late Ipswich Councilor, Ian Grimwood is a 'must' read for all Labour activists in the town. We must remember our roots and try to live up to the values of those who went before us. whilst writing this short post, I tried to find a picture of one of the three leading socialists who led the way in Ipswich- Peter Jackson, Dick Stokes and George Hines- but to no avail. George was one of the very early Labour activists in the town whilst Peter Jackson was our first Labour MP in 1923, whilst Dick Stokes was our MP from 1938 to 1957.
But it is not only the achievement of getting a Labour MP that makes good reading it is the fight to get our first Labour councilors, and I thought it was hard winning Rushmere!
In 1891 Labour won St Margaret's ward and in 1911 came the big breakthrough when Peter Jackson won the Westgate ward seat, it was only with his election that the working class have had a voice in this town and it is now up to us to make sure we continue to speak for the people of Ipswich and give them the council they deserve come next May.

Anyone wanting to purchase a copy of the book can do so via Ipswich Labour Party Office. Email us at: ipswichlabour@gmail.com for more information. £5 per copy plus £2 postage and packing (unless you can pick up from Silent Street, Ipswich)
Posted by Alasdair Ross at 11:14

Anyone wanting to purchase a copy of the book can do so via Ipswich Labour Party Office. Email us at: ipswichlabour@gmail.com for more information. £5 per copy plus £2 postage and packing (unless you can pick up from Silent Street, Ipswich)