Last week was quite positive with a meeting of the Ipswich Town Independent Supporters Trust, where I was honoured to be made Chair. We will be launching a number of campaigns that we feel will be supported by most Ipswich Town fans over the coming season.

On Thursday we had our regular councillor training session, this time the topic was the use of social media. Disappointingly not one Tory or Lib Dem turned up- I will give them the benefit of the doubt and believe they will be attending the second session on this topic.

They both obviously need training on the use of social media, as both the Lib Dem and Tory websites and twitter feeds are so out of date. The Lib Dem website now just features posts about the Lib Dem MP for Colchester! Not even in the same county.
Whilst the Tory twitter feed has not been updated for over a month!

I was disappointed to see an EDL March take place in the town over the weekend, at least it went by peacefully. But both the Army and more importantly the family of the murdered soldier had asked for the EDL not to march- their wishes were ignored by the Far Right group. Only 50 turned up in Ipswich some would say that is still 50 too many! This week I will be attending a ‘Hope not Hate’ meeting in Ipswich as we look at ways to campaign against the menace of far right extremists groups. It is hard to understand why anyone would support the EDL but we have at least one local Tory supporter willing to use twitter to pass on the EDL message and even act as an apologist for their leader. She also seems to like to re-tweet supporters of UKIP! 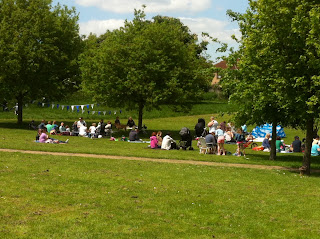 On a far more positive note, I write this post just after returning from the Brunswick Road residents ‘Big Lunch’ or better described as ‘Big Picnic’ – all were having a great time in the park, with a larger attendance than the EDL had in the town yesterday – this says far more about how great our town is to live in than a far right march.

Alasdair, you didn't mention that Muslim charity, JIMAS was also present on the 'march', you discussed. As you're part of the current ruling administration, why did a Labour run council allow the EDL to march in Christchurch Park to the memorial in the first place?

Incidentally, with LibDem numbers down to only three, is it any wonder you don't see much of them these days?