Politics can be a ‘dirty game’ and at times the petty name calling can get you down but there are also often moments that make you realise why being an councillor can be so rewarding. 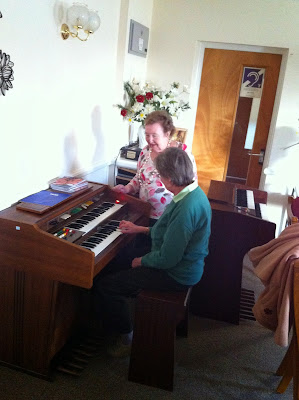 Two weeks ago whilst attending the first ‘Activ-Lives’ session at Dundee House a number of residents mentioned that the organ they own which is used for their monthly ‘Songs of Praise’ events had seen better days.

Later that day I was a guest on the Mark Murphy show on BBC Radio Suffolk and I mentioned that Dundee House needed a new organ, 20 minutes later we had been offered 7!

This Monday, I drove to Woodbridge to pick the organ up from a lovely couple. They were so happy that their organ was going to good home.

When I arrived at Dundee House, I was met by Peggy, one of the residents plus the lady who would play the organ (from St Andrew’s Church) within seconds tunes were being played and the residents were left overwhelmed by the generosity of Suffolk residents.

A great start to the week and so it is nice then to finish the week by writing a positive post.