After waiting over a year the local Rushmere Tories have sent me a leaflet - but strange in that leaflet they have chosen to remind Rushmere residents of two of their most embarrassing moments. 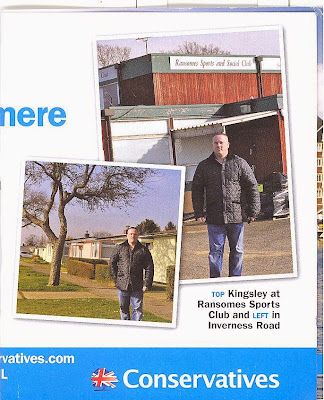 Ransomes and Inverness Road, the two issues where Cllr Terry has managed to confuse herself as well as residents. Trouble is the local Tories are still trying to tell residents that we intend to build house on the Ransomes site. Nothing could be further from the truth; then again in the past, Mrs Terry did forget she had invited a fellow Suffolk Tory to look at the prefabs on Inverness Rd so they could discuss her plan to knock them down!

Alasdair, I am not going to play games regarding who said what and when. My opinion is Ransomes should be put into community trust, I don't care frankly which party does this; it’s more about protecting a community asset. My strategy in Rushmere/Ipswich is not clearly defined within that leaflet, simply because I had very little say in its composition! Ultimately, my focus is to bring people together, bridge the political gap and advocate democracy. This town is great, but it could be better. By engaging with the local population, and loosing this playground name calling political tomfoolery, I would like to see councillor’s credibility heightened, and more cross party integration in an effort to deliver the people of Ipswich what they want and need.

Kingsley - Thanks for your reply.

As you may have seen in the local paper, another sports club- Borne Vale are struggling to survive - it is hard to run a multi sports and social club - Ransomes is now in a much stronger position than it was 3 years ago.
'not playing games' - last night talking to residents close to Ransomes, they informed me that the candidate who you replaced was still telling them that we intend to build houses on the site and a Tory Cllr was also asking local blogs to run the same story (one did). Maybe you should speak to your fellow Conservatives and ask them to stop telling residents lies about the future of Ransomes