Back to real campaigning

At first it felt great to be out on the doorstep, knocking on doors, talking to residents rather than fighting each other in the Labour leadership battle, which at times had quite a toxic feel to it.

But once I started talking to residents it became quite obvious we have a big battle in front of us, the polls are not wrong - Jeremy Corbyn is still not seen as a future Prime Minister to many voters, in particular to those who did not vote Labour in 2015 who we have to attract to win seats like Ipswich.

Constant 'own goals' such as the Corbyn aides comments on Syria/Russia and then examples of what could be seen as an orchestrated establishment/;press campaign against Corbyn such as how the MPs report on anti-semitism has been spun to make it seem the report was just solely an attack on Corbyn and the Labour Party.

What also became obvious is that Ipswich residents are not happy with this Tory Government, it is becoming obvious every day that Brexit will now bring problems for most of us, and then in addition to that in May we are holing County Council elections and Tory run Suffolk have made a mess of highways, 'Travel Ipswich' , care homes and education. Even Tory supporters can see that Labour run Ipswich Borough Council are doing a good job even with the cuts to our funding from this Tory Government. so it is galling to Labour activists that we can't make the most of these Tory deficiencies locally as the public are yet to get behind Corbyn and the antional party.

But all is not lost, I still have doubts about many of the Corbyn front bench but we now do have some excellent and capable MPs in some of the very important junior posts - the likes of Keir Starmer and  John Healey plus some of the Labour heavyweights will also be taking key roles as Chairs of Select committees.

Jeremy Corbyn has won a second leadership battle and has earned the right for all of us to campaign hard behind him to try and win in 2020 but that does not mean we should be silent when groups like Momentum and some of his closest supporters act in a way that will make the cahnces of winning in 2020 almost impossible.

It was good to hear the new Shadow Defence Minister (our third one already) say that we will continue to support the Trident renewal - but it is important at some time that Corbyn also commits to this as we can't have the majority of the PLP and the Shadow Cabinet sticking to Labour Policy whilst the leader sends out mixed messages on this important issue.

So the future? We campaign hard for a Labour Government led by Jeremy and whilst doing taht trying and gain more Labour County Councilors and in 2018 and 2019 retain our control of Ipswich Borough Council - it is obvious from talking to Ipswich residents that the local Labour Party is trusted by them.

Examples of that trust were on public display on Saturday afternoon as first of all Labour councilors were at the local tennis club where improvements have been made to their courts with support of funding from the local Area Committee (same committee the Tories wanted scrapped - not that it stopped Tory MP Ben Gummer from attending the event ). 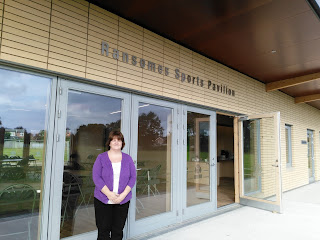 But later in the afternoon was a real example of why Ipswich Labour are trusted over the local Tories, a number of us attended the Senior Cup Football match at Ransomes - and were fortunate enough to be shown round the new million pound pavilion and changing rooms - a complex built by Labour run Ipswich, unfortunately the visitors from North Suffolk to win but it was a comment from one of the Ransomes players that was the highlight of my day, the player commented to one of councilors - " You delivered, what you promised, thank you"  this player like most of the club and local residents have been told at every election that we only took over control of Ransomes so we could build council houses on the site. Saturday was the final nail in the coffin of that Tory lie!

The Tories can't be trusted in Ipswich and Suffolk and residents know they can trust the local Labour Party, residents also are losing faith in the Tory Government and it is now up to us (with an improvement in performance from Corbyn and all our MPs in Westmisnter) to get the message over that we can be trusted to run this great country again.