This week in his local paper column our Tory MP for Ipswich, Ben Gummer used his weekly page to tell Ipswich residents about how important choral music is.

Now there is nothing wrong with any politician using their column to talk about non political topics but very surprising to do so in the week where the NHS teeters on the edge of complete collapse, the lack of funding of social care does not help the NHS cause (Mr Gummer has ministerial influence over social care) the Prime Minister choosing hard Brexit (Ben Gummer was a 'remainer') and in America, Mr Trump becomes President. 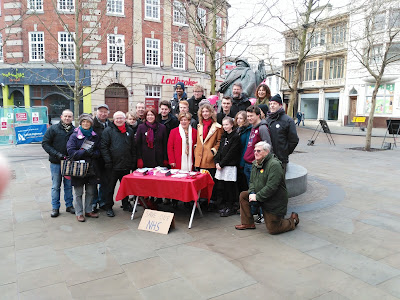 Ipswich Labour - talking about the NHS rather than choral music.


So many reasons that you thought his 'Star' column this week would be about politics, but maybe he has no answers? Ashamed of the state of the NHS? Does not want to remind people he wanted us to stay in the EU?

Or is this an example of Tory complacency, thinking Labour no longer provide a strong opposition - if that is what they think they may have a problem. Labour are not as united as we should be, we do have major internal issues but it was obvious yesterday when campaigning in Ipswich that Labour are still the party trusted most to protect the NHS. Also evident that in Ipswich, the Labour run council is respected for doing a good job with limited funding whilst the Tory run County Council are seen to not acre about Ipswich or its residents.

So Mr Gummer be as complacent as you want, but do not think the public have any faith in you or your party protecting the NHS - but I am sure they are now happy they are more informed about choral music!
Posted by Alasdair Ross at 12:29

Perhaps the poeple you're talking to aren't telling you the whole truth, Alasdair.