Vote on the policies not who the leader is.

We are lucky in Ipswich, we have a strong and hard working Labour Party ,a Labour Council that residents know does a good job and now we have a Labour Candidate who would make a great MP for the town – Sandy Martin 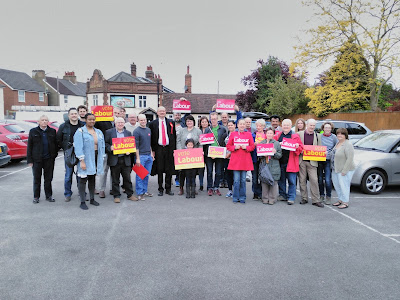 I was tempted to put my own hat into the ring to be the candidate, I think Labour has a great chance to win in Ipswich if we have a local candidate and a moderate.

The Ipswich CLP is made up of many different wings of the party, from moderates to Corbynistas but we have remained united, we campaign hard together and fortunately do not have the outside influences of Momentum to worry about. We discuss policy in a comradely way, we are passionate about what we believe in but in the end we work together for what is the best for Ipswich residents.

Gummer has made much of being only worried about Ipswich, but he no longer lives in the town ( his website still says he does and that he is a season ticket holder at ITFC- crowds are so low now, I am sure I would have spotted him if he was.) His latest paper seems to take claim for anything good that is happening in the town from the new cinema in the Buttermarket and the building of a new car park – both done by a Labour Council with little help from Mr Gummer or his Government!

He boasts about the changing fortunes at Chantry but seems to want us to forget the mess left at Ipswich Academy when the Scandinavian Trust he backed left to be replaced by a trust who now have  a building that does not suit the way they want to run the school.

So we need a new MP who cares about Ipswich, lives in Ipswich and who can work with a Labour Council to help improve the lives of all Ipswich residents (not just those who just live north of Valley Road!)

So I will work my socks off for Sandy – I am not a fan of Corbyn but I am campaigning for Sandy and the local Labour Party. For all my doubts about Corbyn, he would still make a better Prime Minister than May – the cyber attack on the NHS, her stance on Brexit and her failings as Home Secretary – none of these add up to ‘strong and stable’.

When Corbyn won the second leadership battle, I wrote this;

I would ask all Labour members to stay, the party, the county, the electorate are far more important that one leader.

This is still important now but I would say to those who want to vote Labour but worry about Corbyn that the country is more important than one leader and that we have a good manifesto and good MPs who can implement it.

As someone put on social media today;

Then vote Labour and vote for the policies. You’re not choosing who you want to be King of the Jungle on I’m a celebrity get me out of here.