A few years ago the Ipswich Tories listened to the local Tory Councillor for Rushmere (Judy Terry) and decided it was time to knock down the Prefab bungalows in the North East of the town.

The Tarran Prefabs were built just after the war, with over 19,000 built in the UK, all erected under the Temporary Housing Act. Life expectancy of the Prefabs was meant to be 15 years but in Ipswich they are still going strong!

Partly due to the location, the fantastic gardens and also partly down to the community spirit the residents living in these houses seemed to have.

So when Tory, Judy Terry came up with her plan to knock them down she faced stiff opposition from the residents and I was happy as a local councilor to support them.

Fast forward to 2017, and the Labour run council has put on new roofs, installed new kitchens and our Labour County Councillor, Sandra Gage has manged to get the verges repaired and drop down kerbs put in place for the residents who required them. 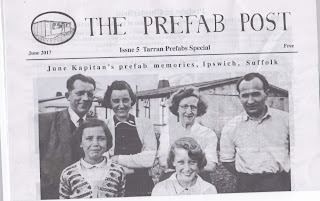 It was during the campaign to save them from Tory bulldozers that we became aware that their is a 'Prefab Museum' a group supported by the Heritage Lottery Fund. The group came to Ipswich to speak to some of the residents and in this months issue of the 'Prefab Post' you can read about how one of our residents June Kapitan first moved into their Prefab in 1955, leaving in 1964 but returning again to live in Inverness Road again in 2010.

If you wasnt to know more about Prefabs look here
Posted by Alasdair Ross at 10:08