In 2009 in Sangin, I was always impressed by the bravery and humour of the young Rifleman. Maybe as I was a stranger to many of them taht seemed happy to chat, in the queue at lunch or waiting for the weekly phone call, running round the helipad or looking for a book in the makeshift library. one thing i did notice was that even if the type of conflict had changed, the weapons and the threat - Rifleman are still rifleman and for every young man I met in 2009, I could see in them the same attributes taht I had seen in young Rifleman I had served with in Cyprus, Germany, Belfast, Crossmaglen, Bosnia or Kosovo. The same willingness to question, to laugh, mischief always close but also you knew taht your could depend on them.

I never wrote a letter like Rifleman Thatcher did, I did not need to, most of my time was spent in the slightly safer surrounds of the Operations Room in Sangin, but if I had I am not sure my words would have been as passionate, eloquent or thoughtful as those of this young man.

Please listen here as Benedict Cumberbatch reads the last letter from Cyrus to his family, no doubt that if he ad survived taht summer of hell, he would not have been a senior NCO within the Rifles, our Regiment lost a future leader, his family lost a son and brother. 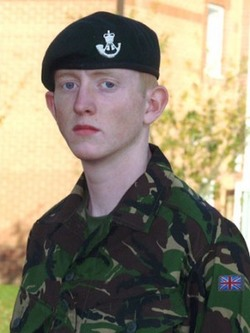