The Clash and the music of 77 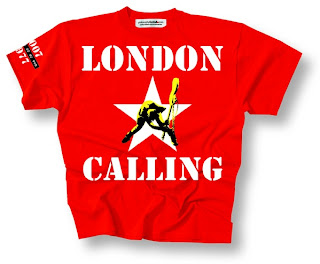 Three decades ago The Clash released 'White Riot' and as Billy Bragg puts it " the flame they lit is still burning bright." At www.philosophyfootball.com we are celebrating Clash Culture with four unique summer designs inspired by the lyrics and graphics of the band. Part of the profits will be donated to Billy Bragg's Jail Guitar Doors initiative (www.jailguitardoors.org.uk) like our shirts also inspired by the Clash. From Paul smashing his guitar on our re-take of 'London Calling' and the message 'Hate and War' that was spray-painted on Joe's boiler suit, to the words of Garageland as pointed today as they were back in 1977 and English Civil War, the band's pointed anti-militarism anthem. Four shirts for nostalgists or those new to The Clash, available in sizes S-XXL, plus skinny-rib. At http://www.philosophyfootball.com/

I managed to win a set of the shirts!

The shirts by Philosophy football are great- as worn by myself and the Ipswich agent- who can say more than that!
Posted by Alasdair Ross at 19:15

Now that is a t shirt to have. I must check out the site