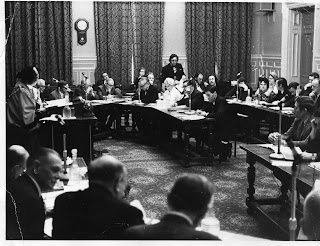 It was once said that towns were run from smoke filled Council Chambers- or was it smoke filled back rooms in pubs -well here is a picture of Ipswich Borough Council in the early 70's maybe one of the last meetings of the last Ipswich Unitary Authority. Will be interesting to compare it with the first picture of the new Ipswich Unitary authority in May 2008 (or 2009 if those un -democratic Tories and Lib Dems get there way.

Both my mum and dad (Annie and Peter Ross) are in the picture- will I make the picture in 2008?
Posted by Alasdair Ross at 18:52