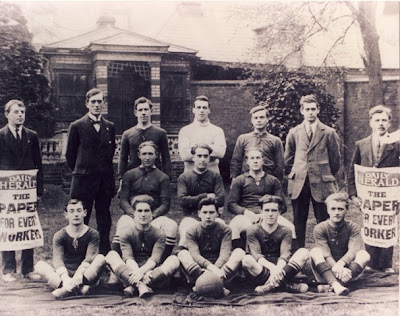 John Cook at the Ipswich office passed on this picture of Labour Athletic FC, who played in the the B section of the second division of the Ipswich and District Football league in 1919/20, this was the first season after World War I, the team managed a third place against the likes of Great Eastern Railway, Manningtree United, Old Nactonians Reserves and Zoar Athletic!
Posted by Alasdair Ross at 08:07

Thanks for posting this on your blog. A couple of extra notes. The bloke in the bow tie is Peter Jackson, first ever Labour MP for Ipswich. The photo was brought into the Party Office by an Ipswich constituent whose father was a member of the team. He died when she was a child, so the photo is a much treasured possession of hers.

And third place is the best you can hope for in the Euro's too!!!!