All over bar the shouting? 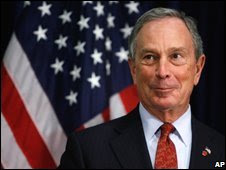 Bloomberg- Mayor for a third time?
Just back from New York and other then the TV News channels, there was not much sign of the US Presidential election. There were a couple of stalls in Time Square selling dodgy Obama fridge magnets and badges but you would have thought there would have been more on show with less than 2 weeks to go to polling day. It was only after taking the ferry to Staten Island that I saw my first election posters, two for Obama in a shop in St George on the Island.
The reason why? Obama having a double figure lead? They all now think it is a forgone collusion?
The TV and papers think it it's all over but in the bars there is still a fear that when it comes to polling day there will be many who find they can't vote for a black man. McCain has support as a war veteran he does have the respect of the electorate but it is his links to the Bush administration that hold him back more than having Palin as his running partner though she does seem to be the butt of many jokes as she is over here.
So it was strange to be close to Wall Street and still not here much talk of the election but politics was the talk of many bars but it was Mayor Bloomberg trying to push a change through City Hall that would allow him a third term that was the main political talking point. so even in New York, local issues are often more important to the electorate than national issues.
Posted by Alasdair Ross at 16:11