Back in April, I posted about how there was very little wrong with the youth of today, this was after attending a lecture which highlighted the bravery of our young servicemen in the battle for Basra Palace. But it is not only in Iraq and Afghanistan that our young citizens show us that there is very little wrong with the youth of the 21st century.


Yesterday I was fortunate to attend the presentation of Gold Duke of Edinburgh Awards at St James's Palace to 350 young adults. It was a fantastic occasion both for the those receiving their awards and also their parents.


It may seem strange a socialist praising the monarchy but I see no problem in praising the Duke of Edinburgh for his patronage of the award that bears his name. I would also praise Prince Charles for his patronage of the Princes Trust. Both the D of E Award and the trust give youngsters the chance to show that they are a generation that has plenty to give back to the community.


I am fortunate to be able to help with the award and it was with considerable pride that I was able to witness Chris Hollins of BBC Breakfast TV present Gold awards to Felicity McNeil and Katherine Harris, two local girls who have both benefited considerably from participating in the award. 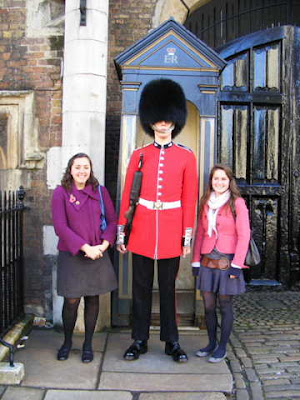 Felicity and Katherine with someone slightly taller!


Two other things stood out about the day. the Duke of Edinburgh has a fantastic knowledge of ties! He spotted that my tie was the regimental tie of the Royal Green Jackets and the second thing that stood out was how expensive jars of sweets in Fortnum and Masons are!
Posted by Alasdair Ross at 15:42