First off I must say it has been a pleasure to campaign for and alongside Sandra Gage. There is no doubt in my mind that Rushmere will now be far better represented than previously now we have Sandra as our County Councillor. 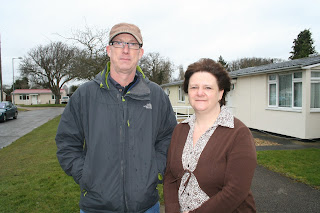 She lives in the ward, her children went to local schools and she cares passionately for the community she lives in. Her previous experience at Suffolk County Council will also be a great asset as she starts to work for us - her constituents. Working alongside Tracy Grant and myself she will make sure we have a strong Labour team in Rushmere, she will also bring a number of skills (plus passion) to our North East Ipswich team.

There certainly is no love lost between myself and Tory Judy Terry so I am glad that she is no longer representing us on the County Council, her disastrous handling of the Library service and more locally her involvement in the dispute over a the provision of a lollipop person outside Sidegate Primary School means she will not be missed by many residents. She has certainly let down many Rushmere residents with her ill thought out statements about the prefabs in Inverness Road but it does mean we have plenty of work to do to repair the trust between those residents in the prefabs and their elected representative's.

We also can't just ignore the number of votes that UKIP gained in the ward, we must listen to their concerns - was it just a protest vote? It is understandable that many residents have concerns about immigration and debate on the matter is needed but it is not helped by the inflammatory leaflets put out by UKIP (highlighting the number of Bulgarians that could enter the UK) or some of the very right wing press reports written by the likes of the Mail and the Express.