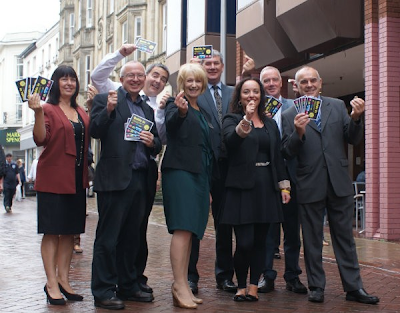 Last Friday Ben Gummer used his ‘Star’ column to explain that he believes one of the reasons Ipswich is behind Norwich as a shopping location(his view – not mine) is because of our car parks – both location and price, Ben believes they are too expensive.

To many the article seemed to be yet one more attack on the Labour run Borough council by Ben Gummer. Now some may say, that is what Labour politicians would think – but the main contributor to Ipswich Spy, a former Tory agent and councillor seemed to think the same and even wrote a post informing Mr Gummer he was wrong with his views on IBC and car parks.

Then 3 days later, Ipswich Central alongside the Borough Council, the County Council and NCP announce that car parking after 3pm will now only cost a total of £1 plus there would be deals on both buses and park and rides into the town.

This announcement quickly saw Ben Gummer inform Ipswich Spy they were wrong in their post and that he was not being critical of the Labour run council but was just offering advice. He even informed me that I was wrong by twitter – I could not reply as he has blocked me. Some of his tweets may even give one the impression that he was taking credit for the idea!

Ipswich Spy (unsurprisingly because of their Tory links) accepted that they had misinterpreted Ben’s column and that he was not being critical of IBC. The point is that on first reading, Ipswich Spy did think he was being critical – so what did Ipswich residents/voters think?

In my opinion the launch of ‘Quids in’ on Monday made Ben Gummer look even more stupid as it showed that the council had been working for some considerable time on a scheme to reduce car park prices and attract more people to the town centre.

But within hours of a Ben Gummer stating that he not been critical of the council, another Tory ‘Blue Ed’ was supporting Mr Gummer, but gave himself away as a troll as he mentions that the column of Mr Gummer that mentioned car parks was two weeks ago, but there was no column two weeks ago and the ‘car park’ column was only 3 days previously.

Some might think that the timing of the column was the problem – was it meant to have been published a week earlier? ‘Blue Ed’ seems to think so.

So did Mr Gummer k now about ‘quids in’ before he wrote his column? You would have thought the Tory run County Council may have mentioned it to him – then again Tory Mr Newman and his Officers do not have a great record of telling anyone what they are planning as we have seen to the recent road traffic schemes.

Even if Mr Gummer did not know about ‘quids in’, he could have still praised Ipswich Council for what they were doing to attract shoppers into the town, we had already reduced car park prices to just £1 an hour in a number of our car parks. He could have also asked why the County Council – Tory run – had stopped the Bury Rd ‘Park and Ride’?

So for all Mr Gummers tweets and comments, to myself and many others his column last Friday was yet one more attack on the Labour run council –in hard times – with our grant from his Government reduced, we are doing all we can to help business in the town – to attract shoppers and visitors.

I hope Mr Gummer is in Ipswich this weekend, and manages to visit the Maritime festival and he will see yet one more successful event that IBC is supporting and managing with the aim of attracting more visitors to the town.