Over the last few days Ipswich has commemorated the centenary of the start of World War One, last night a poignant event was held at Christchurch Park and it was an honour to hear the stories of those who served in that time, not just soldiers but also the woman munitions worker from Ransomes, the Red Cross volunteer from Woodbridge. 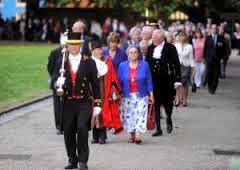 On Sunday Ipswich honoured those who have served in a more recent conflict- hosting a medal parade for local reservists who have just returned from Afghanistan. The event was held at the Mansion, the sun shone, the Mayor spoke to every single reservists and it was a pleasure to see the visible pride in the faces of the relatives who attended to see their sons and daughters receive their medals.

Two very different events, but it emphasised the point that World War One was not the war to end all wars that many thought it would be. The current hostilities in Gaza, Syria, Iraq, India, Pakistan, Somalia, Kenya and the Ukraine show that many of the world still live in a state of conflict. The major concern to many should be the similarities between the conflicts in Syria and Ukraine to those conflicts and arguments that caused the outbreak of war in 1914.


I think it is very important that we do commemorate the First World War and hopefully learn lessons from studying that conflict, it is essential that we include as many young people in events over the next 4 years. As civic leaders I also feel it is important that we play our part and on that note I was very disappointed that none of our local MPs attended the event in Christchurch Park to commemorate the start of World War One or the medals parade on Sunday for our reservists, most of the local MPs were able to attend the event at Bury Cathedral on Sunday afternoon but I do not think it is too much to expect at least some of them to attend events in Ipswich. I must admit last night at first I felt anger in their non-appearance but that soon changed to disappointment and I hope that though they may not have been at Ipswich they may have attended another local or even national event.

Even more important than involving our your people in events it is important that the centenary of World War One is used to remind politicians on the horrors that war can bring to all our communities.