Ransomes the truth not Tory lies!

The latest tirade of untruths come (no surprise) from the former Tory councillor for the ward, Judy Terry. Now I am sure that a number of Ipswich Tories know that Mrs Terry is being very economical with the truth but their leader informs me that she can’t stop former Cllr Terry from giving her ‘opinion’ but you would think she would possibly ask her candidates for the council next year not to repeat the accusations as she is well aware that a new pavilion is being built on the site and that we have (and never did) have any intention of building a council estate on Ransomes Sports field.. But she seems to think it is OK for Tory activists to give Mrs Terry a platform to continue her campaign of misinformation as by posting her version of events it does not mean they agree with her!

Last month, Mrs Terry used her ‘Flyer’ column to be very critical of politicians – so you may understand my anger when she continues to be very economical herself with the truth in her latest rant about Ransomes.

Let us look at some of her comments;

She then states IBC had a fierce legal battle with the clubs management – fact is we had a legal dispute with one person – the site manager.

She is right in stating the clubhouse has been condemned and is now being demolished but forgets to mention that the various sports clubs are very happy with the new changing rooms – temporary but far better that what they had before.

She also mentions we will not talk to local football club Ipswich Valley Rangers, who were interested in the site – wrong again, we have and still are talking to Ipswich Valley Rangers, and helped facilitate their move back to the town from their former ground in Melton and they now play on IBC owned pitch at Gainsborough. As Ransomes FC play in the same league not as easy as Mrs Terry would think – moving one club in and asking another club to leave.

She also states there has been no consultation with residents – the residents of the three closest roads have had regular newsletter delivered to them to keep them informed of what is actually happening rather than them having to listen to Tory canvassers inform them we were planning to build a council estate on the site!

Then we have yet further proof to show that she has little knowledge of what actually happens at Ransomes or the local sports scene ( disappointing as that used to be her portfolio!)

Judy Terry comments (Ransomes) has thrived, with hundreds of youngsters, as well as adults, coaching and playing sport every evening and at weekends – and all day in the school holidays. Now, this level of activity is just a distant memory; a great loss to the community

Distant memory? I called in today, a packed car park and youth and adult football matches being played side by side. School holidays – football courses were run by ex ITFC player Jason Dozzell before we took the club back over and guess what? Every holiday since Jason has continued to run his football courses at Ransomes . 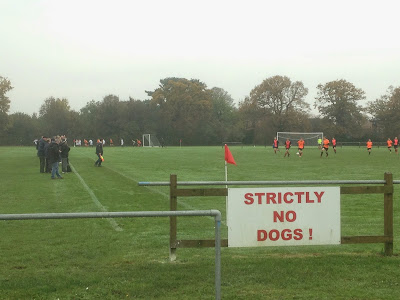 I attended Ransomes on a Sunday at the end of last season, and there were hundreds of children playing football with their parents and families watching – As Ransomes successfully hosted the end of season local youth football league finals.

She mentions a Labour leaflet where we accuse the Tories of wanting to build houses on the sports ground – as I have delivered 90% of the leaflets in that area, I can’t remember one! Best bit is she then states she did want to build houses on the site! (The Tory candidate who blogged this misinformation is not sure if that is still Tory policy)

What Tory Judy Terry forgets to tell readers is as telling as the information she does give out.

One sports club has left the site, the Bowls Club, who were forced out by the old club management, they were soon followed by the sequence dancing club – even though they had raised much of the money needed to keep the hall up to standard. IBC has since found a new home for the dancing club at Gainsborough.

The cricket ground had already stopped being used by the County after the old groundsman was forced out by the club management.

She gives IBC no credit for planning to build a new pavilion or restoring the memorial gates. She talks about making the club a community social enterprise – does she not read local papers? St Clement’s, John Player (Bourne Vale) all local sports clubs having problems. Multi sports clubs are hard to run, football and cricket seasons now overlap, very few players play both sports their is always friction between sections and that friction is where probably Ransomes went wrong with the bowls club being the first victims of that inability to work together.

As both a local councillor and a sports fans I will continue to campaign hard for the future of Ransomes, I look forward to the new pavilion opening, the newly restored Memorial Gates being placed back on Sidegate Avenue and the continued success of Ransomes Football Club, Ransomes Youth FC, St Margaret’s Cricket Club.

But none of that will be made easier by the local Tories continuing to spread rumours and scare residents with talk of housing estates being built on the site.

Cllr Cenci the Tory leader seems happy for one of candidates to continue to help spread lies about the future of Ransomes - he seems to do it every year. A post he did last year upset a member of the cricket club so much that he wrote to Mr Algar who maybe not surprisingly did not post this sportsman's view of what is really happening at Ransomes, and the writer is not only a member of Ransomes but also lives in a house that backs onto the site!

Worth posting his reply to Mr Algar again , maybe Cllr Cenci and Mrs Terry should read it!

I have recently read your blog dated 25th April 2014, concerning Ransomes Social Club and the apparent labour agenda under the leadership of David Ellesmere as the parliamentary candidates to eventual use the land as a building site.

I feel compelled to email you to express at first hand the inaccuracies of your article and politely request you retract elements of your blog. As a member of St Margaret's Cricket club for over 10 years we had witnessed at first hand the unfortunate decline of standards and facilities over recent years. In the 2013 season, we did not have hot water at times, electrics were in a dangerous state of repair and asbestos was rife throughout the building (to name but a few). Financially, one could argue, the club was being mismanaged and no longer financially viable.

When the Ipswich Borough Council took over the grounds with a labour run local government we (along with the other sports teams) had some real reservations about political interference initially. As a resident, with my property backing onto the land, I was concerned. However, we had consultation meetings, our committee members met with the council and labour representatives regularly and we have continued with these dialogues. Slowly my worries have somewhat eased.

Let's examine how things look in late April 2014. The Ipswich Borough Council under the labour leadership of David Ellesmere with councillor Mr Ross, Ms Rudkin &Mr Grant have done the following within the past few months.

1. Rightly condemned the building due to safety reasons to protect the public
2. Hired the correct equipment for maintaining the ground
3. Improved facilities by adding quality temporary facilities with showers and toilets
4. Improved the electricity and water supplies
5. Improved our meeting room with new kitchen equipment
6. Cutting the ground regularly
7. Ensured that cleaning is done regularly of the changing rooms and to a high standard

I could not be happier with the progress and could not have asked for more from the council. I have had letters reassuring me the council have no plans to build on this land. The money being spent on this and the time and effort seems to overwhelmingly support these statements. The futures, is looking brighter with the community rightly taking a more active role within collaborative with all parities.

Your comments in my opinion are unsubstantiated with a lack of primary evidence and personal experience. I urge you to readdress the blog at your earliest opportunity. In my opinion, Ransomes Sports & Social Club as a community sports area should not be used as a political football, particularly as in my opinion on this occasion Mr Alger you have scored an own goal!

If the Tory leader is happy for lies to be spread about Ransomes by one of her council candiadtescan we trust what her councilors and candidates say about the Northern Fringe of any other issue that involves the residents of Ipswich?

Then again Tory candidate Mr Algar also once posted about his own Tory Group " Then you have the Tory ‘opposition’ - utterly shambolic and pathetically weak. One of the reasons Ipswich Conservatives abstain in votes so often is the fact that they have no policies and don’t believe there is a need for any" - so maybe he gets his facts right some time!
Posted by Alasdair Ross at 15:15