The lack of compassion by Tory politicians over the Syrian refugee crisis has even shocked me, would expect UKIP to try and use this humanitarian disaster for their own means but disappointed when even here in Ipswich, local Tory leaders attempt to use unfounded claims about ISIS terrorists attempting to make their way into Europe (and the UK) pretending to be refugees fleeing from Syria.
The facts certainly show that this is not likely to happen but as senior Tory Ministers are also willing to peddle this lie it is of no surprise that local Tory politicians will also repeat it. In my opinion they are using this poor excuse just as a reason to do nothing – because they want no refugees, migrants, immigrants in this country- a case of ‘shut the door, I am in’ or more simply put ‘I’m alright Jack’.

Bu the attitude of the Tories nothing new, the similarities between the behaviour of Cameron now over the Syrian crisis and Baldwin during the winter of 1937 over the possibility of Basque refugees arriving here from the Spanish Civil war are quite striking.

This week Ian Herbert of the Independent wrote a fascinating article about how a number of those Basque refugees ended up playing professional football in the UK – more here. It shows how a refugee, Emilio Aldecoa blazed a trail for Spanish footballers to ply their trade here that would later be followed by millionaires such as David Silva and Cesc Fabregas.
The article also mentions the refugee status of the father of Fabrice Muamba, whose half-brother is now on the Academy books at Ipswich Town.

Fabrice, a refugee himself once informs us (wisely) that refugees are just “ like us, they have all the same hopes and fears. They are part of humanity.” 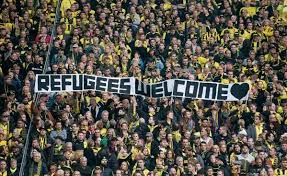 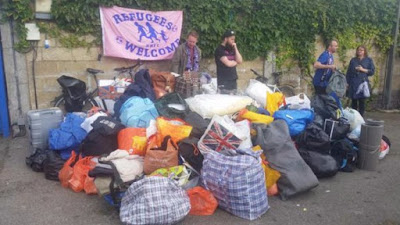 Philosophy Football are currently collecting old football scarves and hats to transport ‘from Wembley to Calais’ to help prepare the hundreds of migrants who will be facing a bleak winter in the Calais ‘jungle’.

The support of football fans is important as it is obvious that Cameron can be swayed by public opinion, and currently it is a battle between the general public forcing him to do the ‘right’ thing and the views of his Tory activists like their leaders in Ipswich who will use any excuse possible to get out of doing what we all know we need and must do.

But as Ian Herbert states in 1937 we had a “humanitarian crisis and a Conservative Prime Minister unwilling to open the door to those in need of escape” and in 2015 we have exactly the same!