Tory run Suffolk do seem to have a real issue relating to Ipswich – their County Town. They work in in, travel to and through it but that seems to be the only real link they have.

But last night we saw yet another example of how little they seem bothered to interact with both Ipswich politicians and residents.

The County Council have held a number of budget consultation meetings throughout Suffolk, attendance has varied but number between 20 and 30 residents attending each meeting were the figures quoted.

On the 30th November, Suffolk tweeted that they would be holding the last budget consultation in
Ipswich on the 9th December at 4pm. No further tweets were issued, (surprising as in the summer we had an almost constant twitter update on what Tory leader Colin Noble was up to), we then had a small piece in the local paper and that was it for publicity.

I turned up to hear what was going to be said and found a room of empty seats- no public turned up, not surprising with so little publicity (they had not even told their own County Councillors) and holding it during the working day. 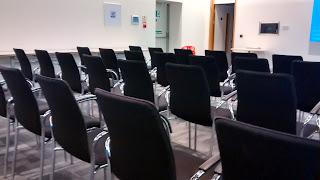 Taken last night at the meeting - a row each?

Eventually we had an audience of 6, one Lib Dem Cllr, 4 Labour councillors (including me) plus the Chief executive from the Borough.

The Tory Cabinet member responsible for Ipswich – Chris Hudson - did not even attend – then again he still has to show his face at any of our Area Committee meetings.

So we have the largest population in Suffolk but seem to get less attention from the ruling Tories than in a small Parish Council in West Suffolk!

Of course the Tory Cabinet may have had more important meetings to attend and as I checked my twitter feed, I saw that the Tory Cabinet twitter account was tweeting about the poor train service from London to Ipswich, complaining about dirty carriages and that top price had been paid for the ticket. They did not say if they or ‘us’ the council tax payer had paid for the ticket! Surprised to see them moaning about the trains as I thought Tory MPs Gummer, Patel and Smith had overseen a dramatic improvement in our rail service over the last 5 years! So it seems at least one Cabinet member was on their way back from a meeting in London - but where were the others?

So what did the Ipswich public miss? Quite a lot and it was not good news, for those setting the budget it seems that savings have to be made at ‘Ipswich Park & Ride’ and that could mean giving 6 months’ notice to the bus company and closing the facility. Savings from the savage cuts to the Fire service are in the budget, so it does make me wonder why they are even holding a public consultation on those planned cuts, also bad news for rural transport, schools and recycling.

Good news is that the training budget for councillors will be retained so that the Tory Cabinet can have further media training at a London Film Studio.

So the budget is bad news, the consultation a farce and the only thing that was confirmed was that Tory run Suffolk have very little interest in Ipswich and its residents!

Wonder if the Tory MPs for Ipswich, Gummer and Poulter plus the Ipswich Tory leader, Nadia Cenci are happy with the way their Tory Party colleagues treat Ipswich?
Posted by Alasdair Ross at 19:36