The people, Trump and Kim Jong-un should speak to about war 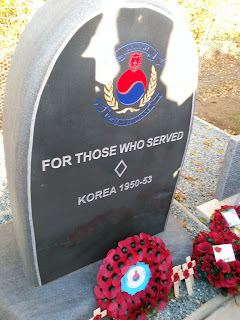 This morning like many hundreds of other Ipswich residents I paraded at the Christchurch Park cenotaph to remember those from this town who gave their lives in the service of their country. Normally this is followed by a beer in the Woolpack, as I quietly think about the friends I have lost in Iraq and Afghanistan, however today there was no time for a beer.

A short drive and I found myself at the Ipswich Millennium Cemetery, meeting my brother, a serving soldier in the car park. We were there to see how fathers names on the new memorial stone to remember those who served in the Korean War.

My father had helped start the Korean Veterans branch in the town and sued to carry their standard, not just here in Ipswich but all over the UK and proudly took it back to South Korea and even to New York as memorials to the war were unveiled. The Korean War is often names 'the forgotten war' but to me it was part of my life, both my brother and me would follow my father into the army. 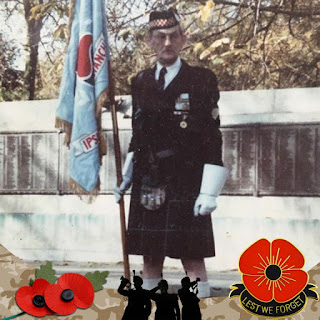 Some of the veterans remembered me, but they had changed, aged, there are now less of them. I remember they used to party hard, drink long and make us laugh when telling us about drunken nights in Hing Kong or Colombo. But they never spoke much about the conflict in Korea. 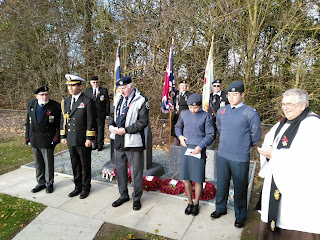 But what I did know, what that the people of South Korea will never forget the sacrifice they made for their country, a place so far from the UK that many would not even know where it is on a map. 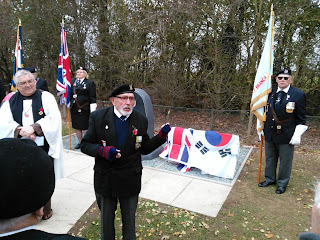 The war finished over 60 years ago but no official peace deal has ever been signed, and today we have two idiots in Trump and Kim Jon-un attempting to push us all towards a resumption of hostilities. War is not a nice experience, it is no surprise that the veterans talk about other things rather than the conflict itself. 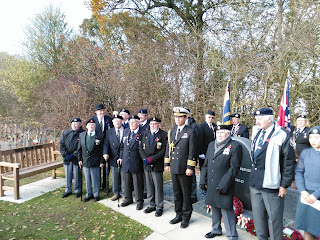 The chief guest today was the Naval Attache from the South Korea Embassy, the way he acted with the veterans showed me that the people of South Korea will never forget what these men did for their people. What Trump and Kim Jon-un should do is meet these veterans and let them talk about their experiences, it may be what is needed to try and get some sense into these two idiots, but it seems they would rather just exchange insults but then they will not be the ones who would have to do the fighting. 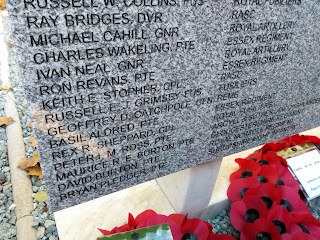 I am proud of what my father and other Korean veterans did, it is just a shame that over 60 years after that war, politicians from North Korea and the USA seemed to have learnt very little about the consequences of war.