I recently tweeted, wishing all soldiers deployed a 'Happy Christmas' but added , even though they were missing their friends and families, they would always remember with fondness the Christmas times spent away with their Regimental 'family', so here is  tale of one Christmas I spent away from home:

In 1987, I deployed to the Falklands with 'B' Company, 3rd Battalion, The Royal Green Jackets, we left our Colchester Barracks knowing we would be spending Christmas, far from home in the South Atlantic.

Do not feel sorry for us, the war was long over, it was their (sort of) summer and the troops were now stationed in shiny new accommodation at Mount Pleasant.

I say shiny, most of it was but the Infantry Company and the Engineers were still at the far end of the camp in what the RAF still termed temporary accommodation, (for most of us it was the most luxurious thing we had lived in!)

Not that we were ever in camp long, spending most of our time either in portacabins at Mare Harbour, living in old containers at Onion Range or on week long patrols across the Islands.

Somehow my section used to get the longest patrols and to add to that we found out that our platoon would be out on patrol on Christmas Day, a 6 day patrol finishing on Boxing Day with a Chinook pick up from Ajax Bay, the site of the Field Hospital from the conflict. The patrol would see us finish at a Royal Signals Re-broadcasting station (Rebro) at Look Out Hill ( just above Ajax Bay) late on the Christmas Day afternoon.

With our whole platoon out over Christmas, many Rifleman decided to carry one can of beer each, to have on Christmas day along with their Army ration (compo) Chicken Curry and bacon grill.

However I hatched a plan, if we were to finish at the  Rebro station, I could contact them and ask them to order a crate a beer extra for the 8 men in my section, it would be delivered along with their weekly rations by helicopter and we would pay them when we arrived. Luckily I knew a Yeoman of Signals from our time in Germany and he put me in contact with the 3 men who lived at the Rebro station, but unfortunately it all seemed too difficult for them and the only beer they had would be a case for the 3 of them.

Not to be put off, I then took walk down to the helicopter squadron, and after a bit of blagging, I returned an hour later with 3 crates of beer, that they had agreed they would drop off at the Rebro station on the 23rd December. Not bad 9 cans a man!

I then went back to our lines, and along with my 2ic, Colin Harlow, we undertook a further study of our patrol route, it was long, over difficult terrain, but we decided to walk a bit further each day so we would arrive at Look Out Hill late on Christmas Eve, a day early. 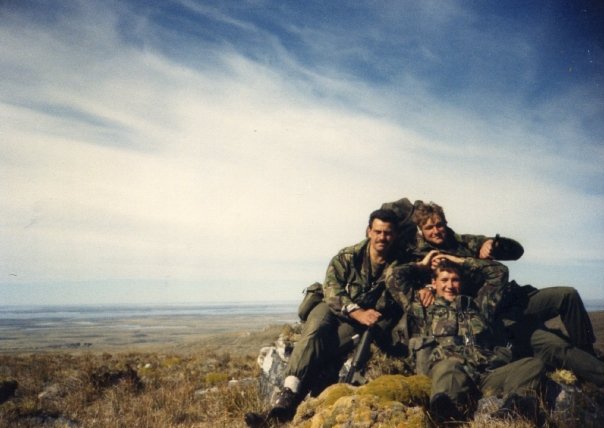 Completing the patrol a day earlier was more difficult than we thought after our radio operator fell on a rock scree field and had to be picked up by helicopter, he was joined on the Chinook by the local Catholic Priest who has spent the first 3 days on patrol with us, I think he was glad to go as the pace of the patrol had not been easy and our Scouse Rifleman, Billy Foy had many bible questions to ask him each night as the rest of us attempted to get to sleep in our hooped bivy bags. 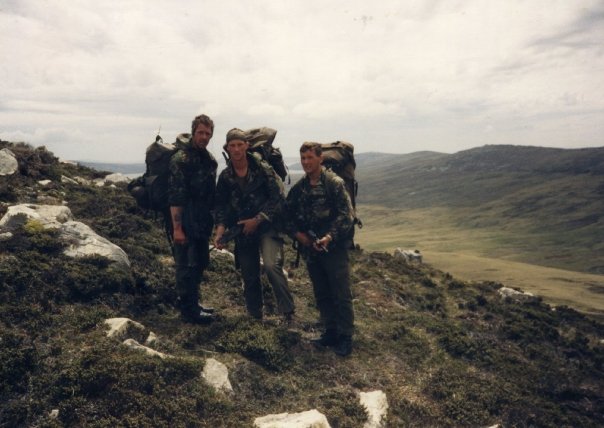 We now had 6 hours to catch up after waiting fro the helicopter plus the HF radio now had to be carried by the patrol members, but we managed it, arriving at the Rebro station just as the sun was setting on Christmas Eve, We thought the 3 signallers would welcome us with open arms, we may not have been the wise men or even a bunch of shepherds however we thought after spending 10 weeks living in the middle of nowhere and hardly seeing another human, you thought they would have been more welcoming when 7 soldiers arrived. We were wrong- they seemed quite happy just the 3 of them living on their own, they had their Christmas planned and suddenly we turned up! 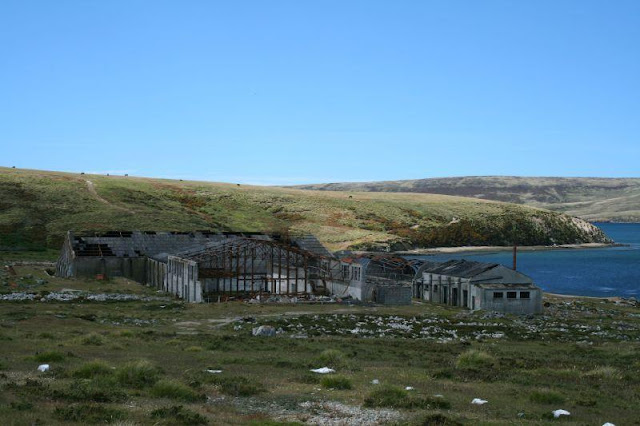 Good news, the beer had arrived and we took over their rest room and made ourselves at home - we even had TV to watch, just videos but they had the complete BBC schedule from the previous Christmas Day, so it was almost like being at home. One of the signallers even offered to cook us fish pie, something he had perfected over the last 8 weeks and with so much fish to be easily caught at Ajax Bay they had been eating his fish pie, twice a week, we decided to pass and stick to our compo Chicken Curry with baked beans and bacon grill. 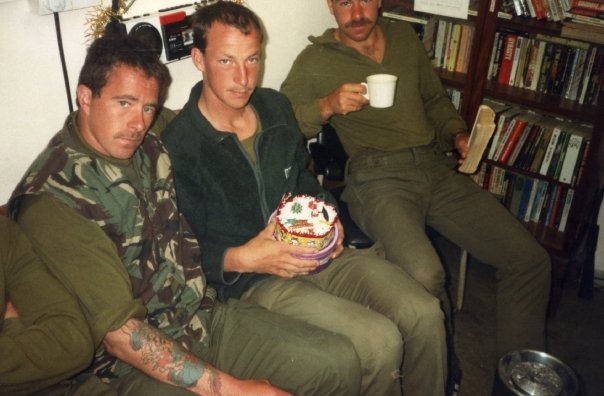 Christmas cake (carried by me) not fish pie!﻿

We sorted out all our equipment on Christmas Even and then spent Christmas Day watching last years Christmas programmes whilst making sure we got through all 3 crates of beer, the 3 signallers soon disappeared to their small radio room to have their own two beers plus eat their fish pie.

We went to bed happy, knowing that the next morning we would have the small walk down to Ajax Bay and a helicopter pick up to be flown back to Mount Pleasant for Christmas Dinner a cracker and one free beer.

We got up in the morning and said goodbye to our hosts, I am sure as I looked back to the Rebro station as we walked down the hill, I could see the 3 signallers doing some sort of celebratory May Pole dance round the 10 metre radio mast.

For once, the RAF was on time and we arrived back at the airfield to be met by the Company Commander and quickly whizzed away to have Christmas lunch, then it all started to fall apart! 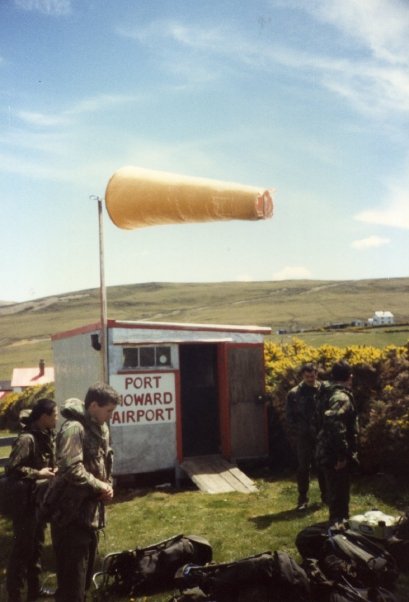 We might have looked a bit smug when we were given our free beer (after having 9 cans the previous day)  but people seemed to be pointing at our section, we wondered why we seemed to be the centre of attention - we soon found out. On the 23rd December our crates of beer (with Cpl Ross written all over them) had been delivered by helicopter to Look Out Hill along with their Christmas rations, what the signallers had failed to mention was that the rations (and our beer) had been unloaded by the General, commander of all forces in the Falklands, as he visited all the distant outposts to wish the soldiers 'Happy Christmas', he was quick to mention that night in the  Officers Mess, to our Company Commander that he had delivered a number of crates of beer ( and had to carry them the 600 metres up the hill from the helipad) to one of his sections!

There are now two schools of thought what was actually said between the two officers, I tend to believe the General was impressed by our ingenuity and Major Balfour, our Company Commander did mention it a number of times afterwards however our Company Sergeant Major, may not have been so impressed ( we had always had a love/hate relationship) as he decided to ban me from every bar in the Falklands exclusion zone, this meant my nearest bar was now on the seafront in Montevideo, and as there was no regular bus/boat/plane to the Uruguayan capital. it did look like I was going to be seeing the New Year in 'dry'.

I did mention that I thought our Company Commander was actually quite impressed in what we had done and this may have been the reason that he selected my section to see the New Year in at the Falklands Adventure Training Centre at Shag Cove. So we spent the end of 1987 and the start of 1988  enjoying ourselves, rock climbing and sea kayaking plus having a few beers, because even if our Sergeant Major was an amazing soldier ( who would reach the rank of Lieutenant Colonel ) we knew he had little chance of making it to Shag Cove unannounced. It was as if Major Balfour actually knew that! 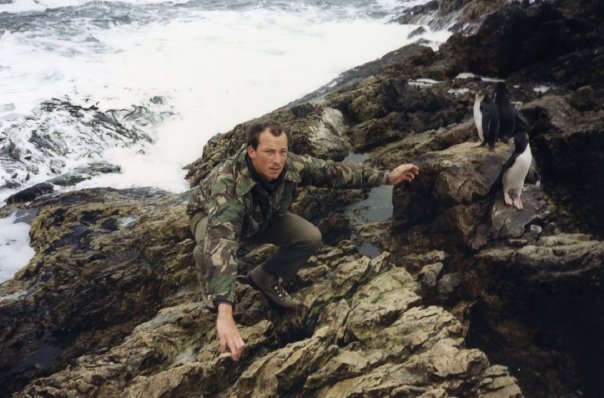 Shag Cove was great for us, as the Green Jacket instructor at the centre was good friend of mine Scoobs Ubhi, so he ensured we had a good time. Scoobs was in a select gang of three corporals who had upset some of the hierarchy in Germany, Scoobs had been moved from 'B' Company to 'R' Company, Taff Addison had moved from 'R' to 'I' Company and I had completed the circle and moved from 'I' to 'B' Company. Sadly since that time in the Falklands, Scoobs had died on a climbing accident on Mount Kenya and Taff had been murdered by the Taliban in Afghanistan.

I returned to Mount Pleasant after a week, got back in the Sergeant Major's good books and had by drinking ban removed.

So for many reasons, I will never forget that Christmas away from my family.

Of course not all Christmases away were that exciting however I may in the future tell you about the one in South Armagh with the mountain bikes and smuggled biscuits or of Christmas 1999 in Kosovo and the tree lights that caused a power cut to whole of Pristina!

For a great account of the conflict in 1982, I would recommend a book that came out at the end of 2018 - about 'D' squadron, 22 SAS, it includes cock ups, mistakes plus bravery and determination by the bucket load..

"Across an Angry Sea" - By Lt General Cedric Delves