Saw a tweet the other day, with a picture of the mobile schnellie wagon of Wolfgang. 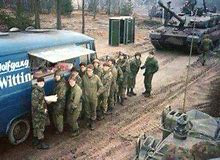 Modern soldiers might wonder what we are all on about, however I am sure certain Range Complexes in the UK still see an enterprising burger van turn up and you then see the resulting large black bin bag of quickly disposed of, half frozen pack lunches!

However, never mind how good those burger vans are, they will not compare with the legendary Wolfgang! His Blue Schnellie Van (Schnellie, British Army slang from the German word for quick food shop - Schnell Imbiss) would roam the large Soltau Training area, in North east (West) Germany. 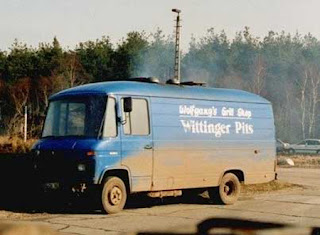 It did not matter how good your camouflage was, he would find you and then any semblance of tactics would go out the window as soldiers rushed to him for Chips mit mayo, Bratwurst mit senf and a yellow handbag of beer.

Rumour had it that he had fitted in his blue van a Clansman 353 radio, a set of BATCO and sets of orders! 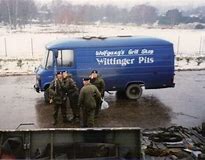 My 3 favourite Wolfgang stories that I actually witnessed are:

1. We were in Soltau with the whole 3 RGJ Battle Group on our final warm up exercise before departing for BATUS in Canada, and to show all of us how large the Battle Group was, we all leaguered up and then walked up a small hill where the CO addressed us. we all turned round and saw the A and R Company 432s, two Squadrons of Chieftain tanks and assorted other vehicles, a formidable sight but as the CO spoke, to the back of the mass of vehicles a late addition arrived - Wolfgang - blasting out music. the brief finished and then 600 soldiers poured back down the hill, past their vehicles as they raced to get to the front of the queue for Wolfgang. 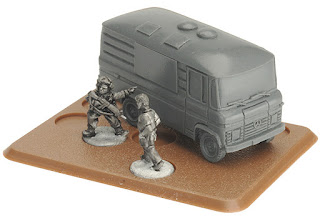 2. I was in the 3 RGJ Milan Platoon and we were dug in with A Company along a valley in Soltau, practicing setting up 'Tank Killing Areas' in case the Russians had ever attacked with their T72s and BMPs, as any soldier will tell you, stood around in a trench was never a soldiers favourite pastime but as the sun dimmed and we got ready for night routine, Wolfgang appeared in front of the trenches. No one moved, we all waited than the first Rifleman jumped up from his trench and made for Wolfgang, soon followed by others all hoping to be served before the hierarchy noticed. We were not helped by Wolfgang blasting out what seemed his only record on his speakers, "Are you lonesome tonight" by Elvis.

3. I was again attached to A Company 3 RGJ, and was travelling back from a brief in the back of the Company Commanders Landover, in the back with me were two young Platoon Commanders, suddenly got very excited and before anyone else spotted him, one of the young officers had spotted Wolfgang. 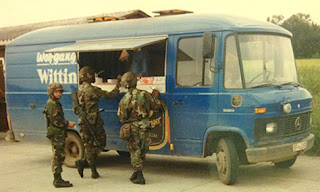 for those still guessing who the Officers mentioned were - the OC (later a General) was last seen working at St Pauls Cathedral and the young Officer reached the dizzy heights of Adjutant (in a warm place, close to Spain)