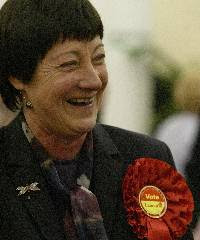 All smiles: a victorious Judy Gannon, who won the Illingworth and Mixenden by-election to retain Labour's seat

With my parents being labour activists, I was probably always going to end up in the party but one of the events that helped shape by beliefs was whilst at school in the 70's when I witnessed the "Rock against Racism" campaign. I was reminded of this recently whilst reading Billy Bragg's book - 'The Progressive Patriot'. Reading Billy's book it is obvious that his political beliefs were effected by those concerts and events in 1978. As well as politically they also helped shape his musical tastes, though I like some of the music that was not excited me, it was the bringing together of not only various cultures and organisations but also the bringing together of all ages with one purpose.
Joining the Army in 1978, at the start of the Thatcher era made it difficult to often balance political beliefs with what the Government was asking us to do but as well as being a Socialist, I was also a patriot and was proud that as a country we had stood against fascism in 1939.
It was at this time I also started to read about those who had volunteered to go to Spain in the 30's to fight Franco, how it had been a fledgling Labour organisation that was one of the main supporters of those who went to fight in Spain.
In 1978, I just could not understand how anyone could support the National Front, as they walked round with the Union Jack in one arm and a Nazi swastika in the other.
I was so thankful but also proud that they had never gained any support in Ipswich.

But the last few years have seen the rise of the BNP, a different name, maybe slightly cleverer but still fascists, playing on fear and poverty, using the propaganda and half truths of papers like the Daily Mail as reasons why people should support them.
But we must be honest with ourselves and admit that it is strong Labour areas that are more susceptible to BNP victories than strong Tory seats.

I was so pleased that I saw in the paper yesterday that Labour had held a council seat in Calderdale (Halifax). The BNP had already won a seat in the Ward (Illingworth and Mixenden )and the Tory Councillor for the Ward had left the Tories to join the BNP!
This part of Halifax could have become the first ward in Yorkshire to have three BNP Councillors.
But we must still take the fight to the BNP, the great news of a Labour win was slightly tempered by looking at the full result:
Labour: 1,104
BNP: 1,034
Tory: 525
Lib Dem: 150
Ind: 68

It is still frightening that the BNP managed to gain over 1,000 votes, at the last election they had won with 1,075 - so their vote had held up but a strong Labour campaign had manged to increase our vote from 840 to 1,104.

In Ipswich we have not seen the BNP, but leaflets have appeared in Westgate Ward and they have tried to a hold meeting just outside Ipswich and our own ward in Rushmere St Andrew.
Posted by Alasdair Ross at 16:08

Good to see. I was out there on the doorstep on polling night.