Save our bus service 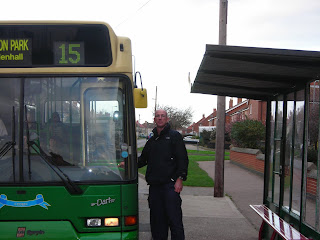 The title of this item may get you thinking this is just a normal local campaign that only effects the people of Ipswich, true it is just the Ipswich bus service that I am talking about but it highlights many aspects of local politics that people can relate to all over the country.


In Ipswich this campaign has really caught the public attention, and the Tories seem to be totally shocked by the public response to the threat of cuts to the public bus service.

A basic explanation of the situation in Ipswich: We have bus service in Ipswich that many town and cities would be proud of. when the Tory Government de- regulated Public Transport, A Labour run Ipswich council set the bus company up as an arms length company and have run it that way since. the Tories now proposes to move the bus depot and then hike up it's rent and also make the bus company pay a dividend to the council from it's profits.

The reason why? So the money from the bus service Will enable the Tories to keep council tax down - their holy grail.

The managing director of the bus company prepared a document to show where cuts would have to be made to pay this new rent and the dividend that the council now required. a number of the less used bus routes will go but also more worryingly at night most bus services will change from two and hour to one an hour. this to me is criminal, especially after the tragic events that occurred in Ipswich before Christmas- we should be looking to increase the number of bus routes at night not cut them - public safety should come before profits.

When Labour and the local paper went public with this it not only came as a shock to the public but also certain Tory Councillor's- even the Mayor! His own ward would see it's bus service cut- it became obvious to many that this administration is run by about 4 people and that they do not even keep their own group informed of policy.

A certain Liberal activist- who has bigger aspirations joined in with the attack on the Tory administration (he is currently a Lib Dem County Councillor) but within two weeks had changed his view to one that the Labour Group were "mischief making". His change in view came around when he found out that the Lib Dem's on the Borough Council - had rubber stamped the Tory plan.

For once we have the local paper on our side, and it has helped us in what we had found a difficult task in informing the people of Ipswich that the council was now Tory run - with support of the Lib Dem's. Up to this point many in Ipswich still thought we were in power. The cuts in the bus service by the Borough and the cuts in Community care by the County Council has at least shown the public of Ipswich and Suffolk that there is still a clear difference between Labor and Conservative- what ever certain papers say.

From reading the letters page in the local paper you can see that the tories have got it wrong this time. loved the letter from the Lady who was a member of the Rushmere Womans Institute- "shows that the council has no conception of the problems of global warming or any interest in the services it is supposed to be providing for Ipswich residents. My members, many of whom are natuarl Conservative voters, await the council's response with interest- L Sexton- President Rushmere WI".