Lions of Basra- Nothing wrong with the youth of today. 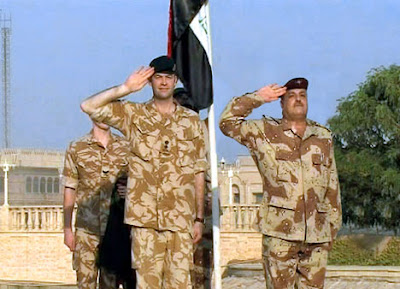 Last week I managed a break from campaigning to go to London for a lecture by one of my former Army commanders. the was by Lt Colonel Patrick Sanders.

Patrick gave a fascinating lecture which gave those who were present a real insight to the difficulties the 4th Battalion The Rifles (2 RGJ) had encountered during those 6 difficult months in Basra last year. the lecture was even more relevant due to recent incidents in Basra where there Iraq Government has had a crack down on the Iranian backed militias.

What it id bring out to me was how much the Iranians are involved in the Basra power struggle and the very different problems that face the British compared to the Americans in Baghdad.

It was strange when Patrick described the many acts of courage undertaken by Rifleman, as many of those he mentioned, I had served with.

Election campaigning can often get you down, especially when you often face so much apathy- house after house of non voters and often young people who have never voted and are unlikely to vote ever, it was a real boost then when Patrick said forget all this criticism of the "play station" generation, what he had witnessed in Basra last years was young people performing immense acts of bravery under very trying conditions- As Patrick said - "There is nothing wrong with the youth of today".
Posted by Alasdair Ross at 19:02

Great post Alasdair – good luck with the campaign in Suffolk.