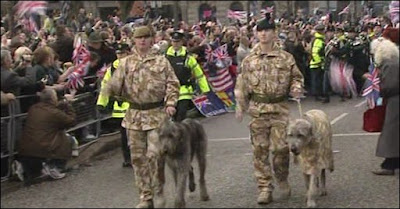 Today in Belfast we will see something that many of us never thought we would ever see, the Army parading through the streets of Belfast. This is the homecoming parade for servicemen returning from Iraq and Afghanistan. But as would be expected in Northern Ireland, it can never be that simple and the day will also see a separate parade by Sinn Fein who said their parade was to protest about the British Army presence in Northern Ireland, Iraq and Afghanistan. Many on the left in Ireland and some in the Nationalist and Republican communities felt that Sinn Fein should have just ignored the parade rather than put in a separate march. There have been concessions on both sides with no RAF flypast and the soldiers marching without weapons and Sinn Fein agreeing to changes in their march route. But why did Sinn Fein march at all? Two main reasons that I can think of, they feared that the loyalist community would hijack the British Army parade and turn it into a re-run of July 12th but I believe the main reason was that when they heard of a planned dissident republican march they felt they had to form some sort of protest. I believe they were wrong and should have not organised their own protest and should not have linked the 'troubles' and the role of the Army in it with the return of British/Irish troops from Iraq and Afghanistan. 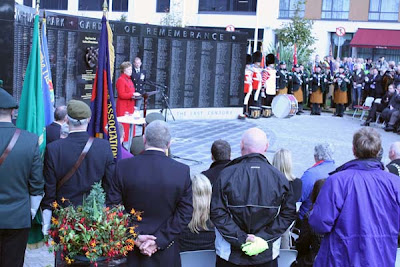 But in the Republic the peace process has seen changes to the way those in the Republic remember their war dead. As with Sinn Fein today, the Irish Government has felt it hard to remember the Irish servicemen who have laid down their lives in both the First World War and since. of course those who volunteered to fight in WW1 were doing so when Ireland was still governed by the British, and maybe understandably that in the 1920's and 30's it was not seen right to remember those who had been seen to lay down their lives for the British Empire but many Irish also volunteered to fight with the Allies in the Second World War and many Irishmen have also served since in Korea and even in Vietnam as members of the US and Australian armed forces. Now those in the Republic feel that they can remember those who lost their lives in the conflicts of the 20th century with no concern for whose county they were serving at the time.

on October 17th this year, the Irish President, Mary McAleese performed the official opening of the County Mayo Peace Park in Castlebar, county Mayo. This fantastic memorial remembers all those from County Mayo who have lost their lives in war, whether they were fighting in the 1st World War with the British Army or since with the British, Canadians, Australians or with their own army in such places as the Lebanon.

So it may take a little longer for Sinn Fein to remember that the soldiers we are welcoming home today in Belfast are Irish soldiers who have been trying to give peace to Iraq and Afghanistan and that it should not be seen as an opportunity to make a political statement about their view of the army's role in the 'troubles'. It has taken many in the south over 80 years to realise that the 11th November and war memorials in towns and villages are there to remember those who have given their lives so that we have the freedom to protest on what we want and where we want.
Posted by Alasdair Ross at 12:17