Football goes to the dogs! 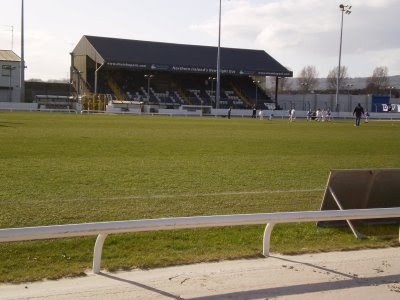 Today I went with a friend of mine too see Lisburn Distillery play Coleraine in the Irish Football League. The first time I had been to an Irish game since 1996. Now for any of you bored by the millionaire clubs of the Premier League or the same boring midweek Champions League games - this is the place to come and watch your football. Similar to the English Non-League scene, crowds are slightly higher but the football is if similar standard. The Irish grounds are like a flashback to the early 70;s and like non league football, you always seem to find yourself ending up in the social club!
My friend is a Coleraine fan so that is why we ended up in Lisburn. Actually it wasn't Lisburn, that is the club name but the ground is closer to West Belfast than Lisburn city centre. the ground is out in the country - on the outskirts of Belfast. the ground is also the home of greyhounds, and by the state of the racetrack restaurant, the dogs are doing better finacially than the football. They even have different names for their shared stadium, the football club calling the ground- New Grosvenor Stadium whilst the Greyhound fraternity use the Drumbo Park name. So if you want to pay £9 to see a game rather than £29 and be allowed to have a beer with rival fans in the social club, get yourself across to Belfast and get your fix of football with a 1970's feel.
Posted by Alasdair Ross at 21:12

Will it be Helmand v Kabul next month, Alasdair?