Not going back to the "Bad old days" 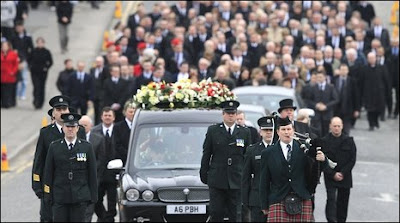 My return to the Army has seen me return to Northern Ireland after a 11 year absence, and the change to Belfast and the remainder of the province in that time is very noticeable and the biggest surprise to me as an ex soldier was the pace of that change.


Anywhere you went in Northern Ireland and anyone you spoke to could not see a return to the " Bad old days".


But will the events of the last 6 days see us slip back into that endless daily story of terrorist atrocities. I for one do not believe so, if anything the events since the murder of the policeman have shown that the dissidents are now entering the 'Last chance saloon'. The wave of demonstrations all over Ireland has certainly not only shown the world that the people of Ireland do not want to see a return to the troubles but it has also shown Republican politicians especially those in Sinn Fein that there can be no return to the 'Long War'.


My Regiment lost a large number of soldiers in the conflict, all murdered by the IRA, not only in Ulster as we also saw our band callously blown up in London and because of that it is hard for many of my former comrades to see the likes of Adams and McGuinness as elected leaders of Northern Ireland . I am sure that there are many in Ulster (and not only protestants) who feel the same. But in the end it is the sight of Peter Robinson and McGuinness sitting together in Stormont and the likes of Alex Maskey at the funeral today and Tom Hartley as the Sinn Fein Lord Mayor of Belfast attending the peace march during the week that gives us hope.


It does show that the leaders of Sinn Fein see that peace is the only answer and that they also do not want to see a return to the "Bad old days".


But though the majority of people in both the North and the South of Ireland want to see the peace kept, the dissidents have a larger support than many would want us to believe, they can call on many ex PIRA members who have vast terrorist experience and they also have the support of many other nationalists in areas such as South Armagh and Fermanagh, even in Derry and West Belfast - the political homes of McGuinness and Adams there will be support for the 'Real' IRA but it will be test for Sinn Fein leaders if they can keep that support suppressed and stop other ex PIRA members 'jumping ship'.


But I hope that they can achieve that as I would hate to see Ireland return to what is was like at the end of the 20th Century.
Posted by Alasdair Ross at 14:54