Sidegate School- "Star of the Week" 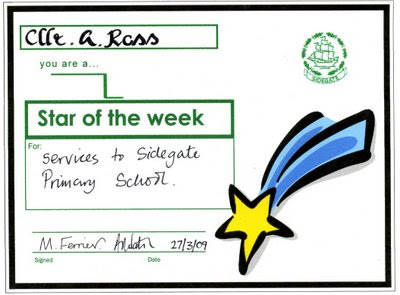 Only home for a weekend before departing for Afghanistan, but it was nice to be able to fit in a visit to my local school- Sidegate Primary.


I love going to visit the school as the children always seem so full of life and though one of the biggest primary school's in Suffolk it still manages to have a homely feel to it. 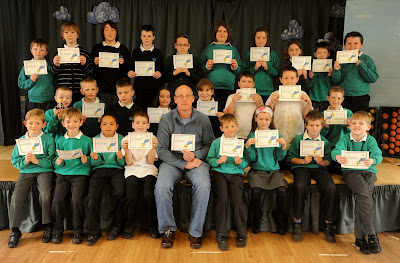 Today I was there to see their weekly assembly, where a number of pupils received certificates for achievements over the last week. Three lads were given certificates for playing the 'giant' in the school production of 'Jack and the Beanstalk'. Others got certificates for maths, homework and for just being helpful.


At the end of the assembly, I was presented with my certificate, as the Headteacher- Andrew Waterman decided I could also be a 'Star of the Week'.


It did give me the chance to tell the pupils of the good work that the British army is doing in Afghanistan, and how I felt it was important that children in that country, whether boy or girl should get the chance of an education. Something that we take for granted over here in the UK.


I will take my certificate with me and it will hold pride of place in my bedspace in the Sangin District Centre in Helmand.


Thank you Sidegate.
Posted by Alasdair Ross at 12:01

Sorry no "Star of the Week" certificate from Ipswich Labour Party! But if we had one, would happily have presented it to you for turning out for campaigning on your last weekend in Suffolk before Afghanistan. Sorry it was such a wet morning.

So many people regard you as a Star - from the Governors at Sidegate to the pupils of Ipswich School where you do so many good things (e.g. Duke of Edinburgh's award).