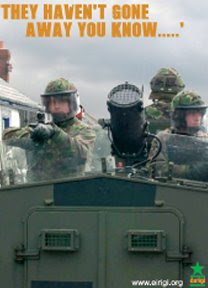 This week I have come across a leaflet that was being handed out in Belfast over the weekend. Now as a bit of a political anorak, I love pouring over election/campaign leaflets- not caring from which party they are produced by. But this leaflet does leave me worried, it was produced by Eirigi. now "who are they" you may ask?


The leaflet describes themselves as a campaigning party with the aim of forming a 32 county Irish Socialist Republic. Now I am proud to call myself a socialist, but I am not one for the likes of those who seem to live in 'cloud cuckoo land' the Socialist Workers Party, Respect and the hopefully now finished Militant. Dreamers and chatterers, and the ones I have met seem to come from middle class or privileged backgrounds. Now at first these seem to be an Irish version of the SWP, originating in Dublin but in their move to expand North they seem to have attracted a different type of member. The Irish Republican who has become disaffected with Sinn Fein and their 'friends' in the IRA.


Respect, Galloway, SWP, Troops Out, all of those organisations in the UK have at some time supported Sinn Fein, trouble is if you do have a true aim of forming a Socialist Republic in Ireland, you have to gain support of the Protestant community. having ex Sinn Fein members in your ranks is not going to help on that front.


So in the North at least, Eirigi have become just a front for dissident republican groups. Now since the murders last month, Eirigi have tried to accuse the media of falsely linking them to the atrocities, trouble is their spokesman in Lurgan - Colin Duffy has been arrested and since charged with the murder of the two young soldiers in Antrim.


So I have no wish to see Eirigi leaflets in Belfast or for that anywhere in Ireland. Now I do wish we could see a Govt in Northern Ireland that is elected on political views rather than religious/sectarian views. So I would like to see Labour and the Lib Dems join the Tories in fighting elections in the Province. Voters on the Protestant Shankhill Road and the Catholic Falls Road have far more in common with each other than a farmer in County Wexford or a civil servant in North Down or a Dublin suburb.


It has to be the mainstream parties that get the ball rolling, because as seen with the likes of Eirigi, any fringe party will end up becoming attached to one side of the divide or other.
Posted by Alasdair Ross at 20:07