Just read an amazing account of an incident involving the Brigade Reconaissance Force in Helmand in Afghanistan, it is such an honest account of what must have been a very frightening event- you can read the whole account here, the post covers the event that led to the death of Sergeant Paul Fox. the account is by Trooper Pete Sheppard 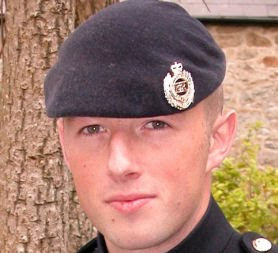 Here is an extract from this very honest and insightful account:

The BRF is outside a small Patrol Base and the vehicles are in a close knit formation. The surrounding area is rural, a lot of farming fields around us with a series of compounds in the near distance.

Our task on this operation is to find, fix and exploit any insurgents in the area. Over the last couple of days we have been conducting clearance patrols moving through compounds methodically. There is a small canal about 3 metres wide just in front of us running north to south.

Other than that the area around is still quite dry. There hasn’t been any large amount of rain for a while, only short light bursts.

Everyone was up for 0345 hours this morning to go out on more clearance patrols. Then at about 0615, there was a big explosion. Everyone looked at each other instantly. Then over the radio net came “CONTACT IED!” another look of shock came across our faces.

Seconds later – “We have a casualty!” everyone went quiet, then “it’s Foxy!” The adrenaline and training kicked in. We started to prep the ‘9 liner’, a situation report needed to send up the chain of command to make them aware of what had happened and of the injuries sustained.

Moments later the medivac helicopter was wheels up from Camp Bastion. Over the net – “he’s in a bad way!” Again, we looked at each other.

The guys still in our position were just shaking their heads. No words were said. From my position in Squadron Headquarters it was so frustrating not being right there and able to react with the guys; I felt helpless being positioned a bit further back.

However I know my job as a radio operator is very important, passing up all the vital information, especially with an incident like this. Still, I wished I could be there to help more.

Over the insurgents’ radios we heard them congratulating each other for the attack. I let out a few expletives. “I hope the lads bloody smash these guys!” I said.

Everyone looked very annoyed at their boasting and I’m sure they were thinking similar things. After the helicopter landed and Foxy was airlifted away the troops came under small arms fire.

This is not typical of insurgent activity as we had an Apache helicopter overhead and the insurgents normally, very rightly so, are scared of it.

A few moments later they went back into hiding, unwilling to risk getting spotted by the Apache. They called over their radios for more back up. Roughly 15 minutes later the boss heard confirmation over the radio – “Your casualty is KIA”.

I looked at Donny (who had just replaced me on the radio stag) in disbelief willing him to say that I had misheard it. He just looked down and shook his head.

The troops continued to be engaged with small arms and a rocket propelled grenade (RPG) until approximately 0900, and then it went quiet. We then proceeded to advance and the lads began searching local compounds. However, nothing and no-one had been found by lunch time.

The insurgents were tantalizingly close. Over their radios they declared that they could see us, they claimed they were starting to mass troops, that they were going to stop us from leaving and that they were ready to start firing at us.

All talk, because once again it was a quiet, albeit somber afternoon. The troops on the ground weren’t officially told of Foxy’s death until they had all returned in from the patrol. This was to prevent them from not thinking straight.

The OC was told first and he then told the Corporal Major. Moments later the Squadron Corporal Major (SCM) called everyone over and told them the news.

Everyone was shocked and p*d off. It is hard losing a character like him from the team. We stayed in our small leaguer for the remainder of the day with no more patrols going out.

At about 1900 we held a service in the field, not far from where he had fallen, in memory of Sgt Paul ‘Foxy’ Fox . It started with the SCM saying “Right everyone gather round.

The Fijians are going to do a service and a few prayers for Foxy.” Jon Jon – one of the Fijians, said a few words about him. Then Rocko read a verse from the Bible, Book of Psalms, Chapter 91.

Jon Jon then went into what this verse meant. After this the group of Fijians soldiers started to sing an amazing hymn called “I need Thee, O I need Thee” They sang this in English to start of with and then for the last verse they sang it in Fijian.

Fijian choir singing is phenomenal. It really touched us all, the harmony of their song. It was blissfully quiet everywhere, all that could be heard were these soldiers singing in remembrance.

A Mortar illume round was then fired from our 81mm mortar to mark the start of a minutes silence. Everyone jumped at the loud bang it made.

Emotions were deep at this moment, thinking about Foxy and even the little things, like the last thing he said to me – asking me if I had any spare sugar for his brew, and then thanking me afterwards. Another mortar round bellowed out breaking the silence.

Then the OC came to the centre and read a poem:

It was a very moving poem. The SCM said “Right everyone, now’s the time to go away and talk about the fond memories we all have of Foxy. When we go to Cyprus we’ll have a drink for him and when we get back to Windsor, after the medals parade, we’ll have a toast.”
Posted by Alasdair Ross at 21:23