We can learn from Europe - Transport and housing

I love this country and as Eddie Izzard would say we live in - "Brilliant Britain" but we can still learn plenty from Europe, this weekend I found myself in Vienna and I came away even more determined to campaign for better public transport in Ipswich. Vienna of course is a capital city and I am not planning to campaign for an Ipswich Underground, but there is plenty we could learn from the Viennese, the ticketing system, the signposts, bus lanes, route planning. There is a possibility we may get this quite soon if the proposed investment on public transport in Ipswich is not scrapped by the new Tory Government.

We understand that the new Government has to make cuts to reduce the national debt, but if the investment in transport is cut, it will be so shortsighted as it will lead to further traffic congestion and make it even harder to instigate further improvements in Public transport in the future. It will also play into the hands of many Tory Councillors who did not want to see any Public transport at all let alone an improvement in it. 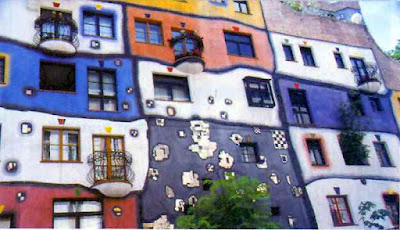 We also could learn from Europe when it comes to building new affordable homes, if you get a chance to visit Vienna, get along to Kegelgasse, a fantastic social housing development built by artist come architect - Friedensreich Hundertwasser, it is hard to describe but it is somewhere that people want to live and also to become part of a community. the sort of development that could have been placed on the Ipswich Waterfront rather than just blocks and blocks of flats, see here for more of Friedensreich Hundertwasse's work
Posted by Alasdair Ross at 21:38