Today I was very proud to attend an event at Grafton House in Ipswich to launch Armed Forces Day. the actual day is at the end of the week, but councils all over the country raised the Armed Forces Day flag at 10.30am this morning. In Ipswich the Mayor along with veterans raised a flag at the Town Hall and I joined other councillors and council employees as we raised a flag at Grafton House.

I think armed Forces Day is a great idea, as it gives the general public an opportunity to show their support for our Armed Forces. I could never have seen that happening in the early 80's, when myself and other soldiers often felt we were being treated like third class citizens. to be honest the Armed Forces get far more support every day of the year now than we ever got, but it is still good to have a dedicated day on which we can thank every member of our Armed Forces.

Today also marked the loss of the 300th serviceman in Afghanistan, this may lead to even more of a clamour for our withdrawal. I for one think that would be a major mistake, if we left Afghanistan, within weeks the Taliban would take over that country and Pakistan would not last much longer. The situation could lead to another India - Pakistan war. We will lose further soldiers in the conflict but we are doing a good job and we are winning. Last Armed Forces Day I spent in Sangin, in 50 degree heat but I knew then we were there for the right reasons and I still believe that now. 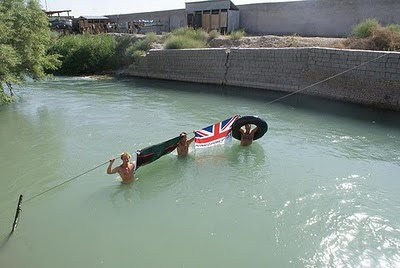 How we marked Armed Forces Day in Sangin in 2009, the only cool place to hold the flag, in the Helmand River
Posted by Alasdair Ross at 21:14