When you see Tory leaflets from the 1960's, it is no wonder some of their members are attracted to the policies of UKIP 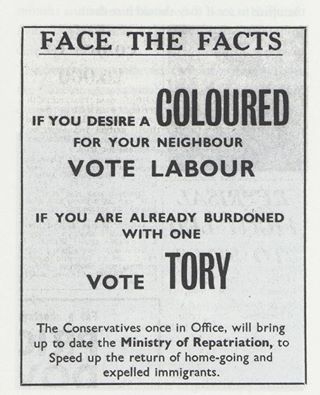 Thanks to Ipswich Spy, I have been informed that the poster may be fake - this has led to an on-line discussion on twitter with the national Conservative HQ stating that the Tories never used it whilst others have given examples of constituencies where the poster was used.

If it is a fake, it seems it is also from the 60's - what it does show that all political groups were willing to use the race card in one way or another for their own benefit.

The concern is that this weekend a van has driven round London - organised by the Government warning illegal immigrants that if they are caught they will be deported. Are the Tory Ministers doing this because they think it will work, or because they are scared that UKIP will take more of their members?
Posted by Alasdair Ross at 10:26