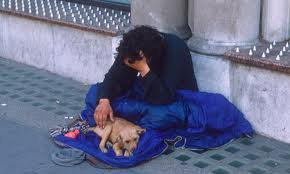 Last night we had one of our regular Ipswich Councillor briefings and on this occasion it was about homelessness in the town- This is a serious problem but one that is going to get worse as this Government’s welfare changes are pushed through.

Some excellent work has been done by Demelza Penberth, the project manager is actually working out who is homeless. The difficult ones who are hard to pin down are those who ‘sofa surf’ either with family or friends. The number of ‘sofa surfers’ is likely to increase and in many cases they do not see themselves as homeless.

The way we treat homeless people is strange, as one of the slides indicated – if your mad, bad or sad you may be housed but if not covered by those 3 tags you have no right to a roof but a homeless dog is entitled to seven days in a shelter with food!

The good news in Ipswich is that we have the ‘Ipswich Housing Action Group’ – they started as a pressure group in the 70’s but they are now seen as an important partner by Ipswich Borough Council.

What they have devised is a way of getting all agencies to work together through the IpPoint, and importantly this will operate outside office hours as we were informed not many people are homeless between 9-5 on a Monday to Friday! All this will come under the work of the Ipswich Locality Homelessness Partnership.

It is believed that in Ipswich there are 144 people who are statutorily homeless and of those there were 46 single people homeless. What the partnership and IBC are aiming for is that no person will have to spend a second night out – sleeping rough. But it is not just about housing people it is also helping them deal with other problems they may have from drugs to drink.

We are lucky in Ipswich to have the Ipswich Housing Action Group and that they have such dedicated staff and volunteers. What was lightly disappointing was the poor attendance by opposition councillors. Only 1 of the 4 Lib Dems turned up and the Tories were not much better with only 5 out of their 12 councillors feeling the need to attend. One of those absent included their Shadow Housing Portfolio holder, fortunately 22 of the Labour Councillors were in attendance including our leader and most the council front bench.

The issue of homelssness will take up more of the councillors work as we see the changes to the benefits system take place, only this week we hear that Delia Smith is opening a 'food bank' in Stwomarket as more people find it hard to get by.