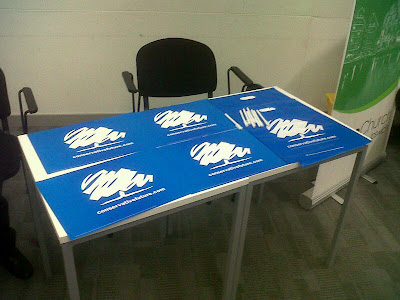 My Tory opponent in May, is still campaigning hard for his party and seems to be trying to drag the local Tory party into the 21st Century by trying (in vain?) to keep their website updated and even get the local Tory party onto twitter – possibly he should offer his skills to Ben Gummer who has a website that is still stuck in February 2012.

Chris Chambers is young and keen – and we need more young people in local politics, so this week Chris was at the UCS Fresher’s Fayre attempting to get students to join the local Tories, after a few hours he left- but we do believe he did get at least one person to join. At least he attempted something the Lib Dems and Greens were at the Fayre last year but decided they had better things to do this September.

I do feel sorry for Chris as he seems to have little help from any other local Tories.
Ipswich Labour managed to recruit a number of members to the Labour Students Society and we will be inviting them to join us campaigning all over Ipswich over the next year.