As 2012 draws to a close, I would like to wish everyone in Rushmere Ward, Ipswich a very Merry Christmas and a Happy New Year.

I would also like to thank all our local community leaders, groups and organisations who I have worked with this year. I am particularly grateful to Sidegate Primary School and the 6th Form pupils at Copleston High school, whom have really shown Ipswich at its best, during both my visits to their schools and when the Copleston pupils came to speak to the North East Area Committee.

I hope to continue to work with them next year and to forge closer ties with Northgate High School, Rushmere Hall Primary School, St John’s Primary School and other local community groups.

Beyond Rushmere and Ipswich I have continued to campaign on behalf of our Armed Forces and Service veterans, it was a great pleasure to see Ipswich join the County Council and sign the Military Covenant. 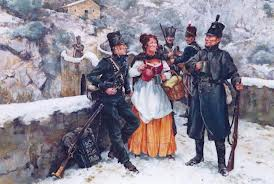 There is no doubt that there is a far better relationship now between local communities and the Armed Forces than when I first joined the army and we saw that here in Ipswich quite recently when we hosted the Royal Anglian Homecoming parade.

In 2013 I will continue to campaign for our Armed Forces and veterans so with that in mind I have attached a Christmas picture from my former regiment, The Royal Green Jackets showing an earlier time when the local community and the Armed Forces got on well.