This week I have had a number of meetings about providing youth activities on Rushmere Estate in 2013, I hope to be able to announce some good news about this in January.

Friday, I joined local community campaigners in Whitby Road. Gemma Farrow a local resident hopes to have Whitby Rd declared a ‘no cold call zone’. I went out with her on Friday to ask residents what they thought we were joined by local police, Suffolk trading standards plus Sandra Gage. Sandra is a ‘community champion’ who was the force behind Meadowvale Close becoming a ‘no cold call zone’. 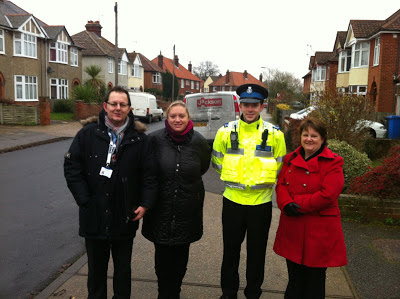 The good news for Rushmere Residents is that Sandra will be joining Tracy Grant, I and the local North East Ipswich Labour team in 2013, campaigning on a number of issues that affect Rushmere residents.

On Thursday, I have my last meeting before Christmas, the East Ipswich Housing meeting, interesting to see if the Tory and Lib Dems councillors turn up ( they have failed to attend the last two meetings) always a good meeting as we have a great group of residents covering the whole of the east of Ipswich on the committee with us.