Our full Governing Body meeting at Sidegate Primary school was cancelled this week as the school found out late Tuesday that it was about to be inspected by OFSTED – we as yet do not know the result of the inspection but I have no doubt that we have the right head Teacher and staff in place to make sure Sidegate provides a fantastic environment for our children to be educated in.

One of our Governors did make an interesting observation, after he was interviewed by the OFSTED team; he declared that it was certainly more grilling than anything he had experienced in 20 years of private sector life. So for those who always knock the public sector, maybe they should take note of that.

The other big story this week was Leveson, the Prime Minister has set himself up for a fall after he declared that he would implement Leveson unless it was ‘bonkers’. Well it was far from ‘bonkers’ but Cameron seems happy to give the press (and their owners) yet one more drink in the ‘last chance’ saloon. 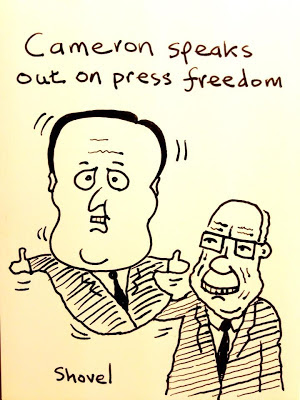 The public may buy the papers but as over 100,000 people have already signed the ‘hacked off petition it seems that most of the public agree with Leveson. Cameron will not be helped as each of the victims of press abuse queues up to have a pot at Cameron. JK Rowling was one of the first to comment and stated on Friday:

"I thought long and hard about the possible consequences to my family of giving evidence and finally decided to do so because I have made every possible attempt to protect my children’s privacy under the present system, and failed. If I, who can afford the very best lawyers, cannot guarantee the privacy of those dearest to me, what hope did the Dowlers, the McCanns and the Watsons ever have of protecting their own children and their own good names?"

So I hope that you may wish to sign the ‘hacked off’ petition here – so Cameron gets the message –listen to the millions not just Rupert!