Yesterday lunchtime, I joined Labour colleagues and pub regulars as we said ‘goodbye’ to the Golden Key pub. It has been a regular meeting place when campaigning in North East Ipswich and also for occasional ‘ad hoc’ meetings. 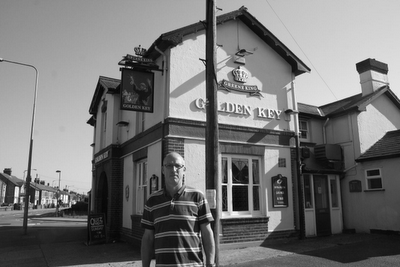 We presented the landlady, Dee with a card with all our best wishes and regulars from the pub presented her with a large bouquet of flowers.

I would now expect Sainsbury’s to move in as soon as possible and we will see what we can do to help the local shops in the area compete with the major supermarket chain.

One positive I will take from the campaign is how the local community came together to try and save the pub, much was made of it being an ‘anti Tesco’ campaign but that is what residents feared and rumours still abound in North East Ipswich that Tesco’s are still searching for a pub to turn into a shop in the area,

Though Labour activists joined local residents in campaigning to save the pub the position of the opposition was harder to gauge. At the first planning application the Tories all abstained – we are led to believe that it was just a coincidence that they all came to same decision and at the next planning application they voted with the majority of labour councillors in turning down the application but even on that application, Cllr Judy Terry the Tory councillor for Rushmere attempted to stop me representing Rushmere residents at the meeting!

So I am still not sure where the Tories stood on the matter, on the first application both the local Tory Cllr for St Johns and Ben Gummer sent in letters to the planning committee arguing against a shop being built on the site but we heard no more from Mr Gummer after that.

A leading Lib Dem blogger also continually attacked us on our stance and the Tories still seem to blame us for the application going through. Very strange that in the campaign to save the Emperor Pub from being turned into Tesco’s, Mr Gummer and Lib Dem Cllr Cann seem very keen to show their support in the local paper whist Lib Dem Cllr Lockington was happy to be photographed alongside campaigners and Labour councillors and guess what? The Lib Dem blogger says nothing!

Even this month Tory Judy Terry uses her ‘Flyer’ column to blame Labour, but seems to have forgotten that she also voted to turn the application down. So whose side was she on – residents or Greene King?

I did learn plenty from the campaign and do feel we were let down by the poor quality of the report from the Suffolk County Council transport department, the same could be said about their report on the Grafton Way development.. We must remember that though the inspector acknowledges his visit took place outside school term he does not believe there will be increased traffic in Woodbridge Road because of the development. I am sure all of those who live near would disagree.


In the end the council listened to residents and refused planning permission, but that in it was an inspector from Bristol who had the final say and sided with Greene King.
So this weekend has been a sad one, we campaigned as hard as we could to save the pub, both on behalf of residents and because we know it is well loved pub. Cllr Terry states that the pub was no longer viable, the only reason why is that Greene King had run it down and have also closed the John Bull, they just want to make a quick kill.
We will miss out Saturday lunchtimes in the ‘Key’ putting the world to rights, Dee and the ‘Key’ will be missed by many.