Wednesday 23 January, 6.15pm – Launch of Handball in Suffolk, at Suffolk One

Like last week, much of my spare time will be spent at Sidegate Primary School – as many of you will already know, the school was inspected by OFSTED in December. The report was not we had hoped for, but I have total faith in both the staff and the pupils to make sure the school improves. I will do a separate post about on the inspection and my thoughts on the school. 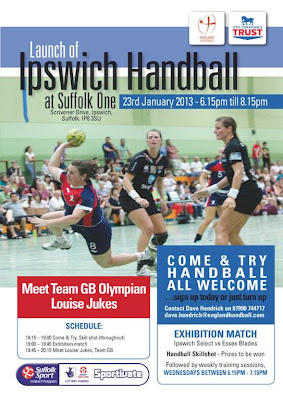 Wednesday will be a great reminder of the great summer of Olympic fun we had in 2012 as Handball is launched at Suffolk One. Much has been said about ‘Olympic Legacy’ and now we have a chance in Suffolk to make sure we have a permanent reminder of those glorious months as we see that start of a new sports club in the town. The other great parts of Wednesday will that you will be able to get a chance to meet one of our own Ipswich Olympians – Louise Jukes. Not sure if ‘Suffolk One’ will rival the ‘Copper Box’ but I am sure we will all give Louise a great welcome back to the UK.

Then Friday we have a 'Stand up for Labour' comedy event - should be plenty of laughs plus a chance to raise funds to help our fight to win seats off the Tories in the Suffolk County Council elections in May.