Terror from both Right and Left - Budapest remembers

Last week I was in Budapest and visited the Terror Museum on Andrassy Boulevard, last year I had visited the Stasi Museum in Berlin and though there were some similarities this centred more on the suffering of the Hungarian people from both the right and the left.

Hungary attempted to keep out of the last war by supporting the German regime but also keeping them at arm’s length. The Hungarian Government had passed a number of anti – Semitic laws but the Jewish community had continued to live in Hungary but with the tide of war turning against the Germans, they eventually seized Hungary in 1944 but they were welcomed by many Hungarians and so the rounding up of the Jews was taken on by the German Adolf Eichmann with the assistance of the Hungarian Nazi Party – the Arrow Cross. Their headquarters was the building on Andrassy Boulevard. 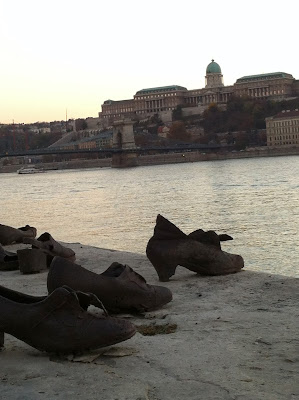 On the banks of the Danube, is a line of shoes, to mark where the Arrow Cross pushed the Jews out, firing into the river as the last Jews were sent to the camps and their deaths. 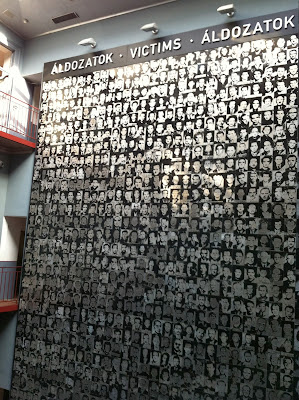 The museum covers the time the Arrow Cross, terrorised the population before they fled with the Germans to Transdanubia. But by that time the frenzied terror of the Arrow Cross thugs had swelled the number of war’s victims by tens of thousands.

As many of those killed by the Arrow Cross are not known, most of the museum centres on the era from 1946- 1956 when the building was the home of the Hungarian Secret Police – AVO and then the AVH – who were supported by the KGB and sued by the Hungarian Communist Party to control the Hungarian population.

After 56, Hungary was one of the more affluent Eastern Bloc countries and the envy of those living in East Germany, Bulgaria or Rumania, but persecution continued but no longer from this large building in Andrassy Boulevard,

It is interesting to walk through the rooms, to see where the secret police worked from and visit the cells where the political prisoners were kept and the room where the gallows still stand.

The most chilling part of the visit is when you take the very slow lift down to the cells in the basement, the lift is dark and on comes a video, an interview with the cleaner who used to have clean the cell after the prisoner was hung.

Hungary is still a country that is trying to find its way in this new free world, Budapest it quite affluent but many struggle to survive and recently the Far Right have gained considerable support. The logo of the Arrow Cross is now even used by some on the Far Right, many remember the cruelty of the Communist era but maybe the Hungarian people need reminding of the terror imposed on the local population by the Arrow Cross in 1944.

According to the charge he took part in the siege of the Koztarsasag Square Prty building and in the lynching of an AVH man on the corner of Aradi Street. He was also charged with arson and having disrupted the December 6 Red Flag demonstration, though the court could not prove these charges.

He was sentenced in the first instance to life imprisonment, and to death in the court of the second instance. He was executed in the building on October 10, 1958 at the age of 45.