Ipswich Tories are right- house building has stalled (but stalled by who?)

Ipswich Tory leaflets have always read more like a fantasy story than a document of facts and public information but this year they have really gone out of their way to persuade the Ipswich public that they (the Ipswich Tories ) do live in a world of self denial!

One of my proudest achievements is to have been part of a Labour Council that is just completing one of the largest council house building projects in a generation in Bader Close and my proudest personal achievement as a councillor has been that I helped enable two roads of new Council houses and flats in Whitehouse Estate be named after two Ipswich (and Whitehouse) soldiers who lost their lives serving their country. 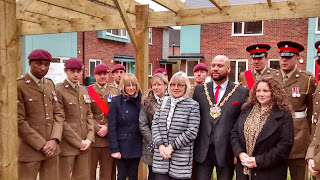 But if you read the latest Ipswich Tory leaflets you would have thought we have not built a single home – the Ipswich Tories (make it up as we go along) PR machine informs us;

“House building in Ipswich has stalled and more needs to be done. Ipswich needs family homes yet this council is failing to provide them. We would make building quality family homes – and the infrastructure accompanying them – one of our top priorities.”

Fact is we would like to build more Council homes and see developers start some large building projects – but we keep coming up against barriers – and these obstacles have been placed in front of us by local Tories from MPs ben Gummer and Dan Poulter to local Tory leader Nadia Cenci and a combination of Tory Borough and County Councillors.

You could suggest ‘I would say that’ but unlike the Tory leaflet I can back my views with facts.

Labour run Ipswich proposed and gained permission for a large development of council houses at Ravenswood in South East Ipswich. Tory Cllr Cenci called our decision in, they were not happy with the amount of social housing – after her ‘call in’ was thrown out they then got Ben Gummer the Tory MP to get Eric Pickles to call the Borough decision in – this was disappointing but only to be expected as Mr Gummer looked for easy votes but what has been disgraceful is that over a year later we are still waiting for this Tory Government to tell us if we can or can’t start to build these much needed family homes. So Cllr Cenci – your right house building has stalled but not because of a Labour Council but because of the actions of you, Ben Gummer and Eric Pickles.

Then we have the Northern Fringe development, the original plan was actually put through by the last Tory/Lib Dem administration – but they needed help from us as 6 Tory Councillors voted against the plan as they wanted NO HOMES built north of Valley Road.

But once we took back power in Ipswich the Tories (and Lib Dems) have become slightly less keen on the building of a large estate in the north of the town. Mr Gummer at first complained about the proposed location of the cricket green! Since then he has written to many residents ( in the build up to the election) stating why he could not support the proposed development. Cllr Cenci went further and distributed an expensive leaflet (with her name on) stating that the new build would see current residents have their commute to work or leisure time increased, they asked for residents views that they would then pass to to Borough Council. I filled in their consultation – but have heard nothing back! Did they ever hand the consultation findings (13 months ago) to the Borough? I ask as some may have seen the whole campaign as a way of farming email addresses! I look forward to reading the results of their consultation – after 56 weeks you would have thought it was ready for publication.

Now I agree with the Tories, we need infrastructure to support the Northern Fringe development but to bill for that must fall to the developer, the TORY County Council and the TORY Government – you may have spotted a theme here.

So have the Tories helped get that much needed infrastructure – no! Dan Poulter MP, declared rather than a northern link road we should just have a tunnel under the Orwell (along with the pie in the sky) Mr Gummer has managed to gain funding for a road- but not the much needed northern link road but for a (possible) Wet Dock Crossing. Which of those two schemes (Northern link Road or Wet Dock crossing) would lead to the building of much needed homes?

Then we have the housing development in East Ipswich – St Clement’s – the local Tories wanted the application turned down and a park built instead!

Ready for a shock statement? IPSWICH TORIES ARE RIGHT! House building has stalled in Ipswich – but the people who have helped stall it are Tories – Ben Gummer, Nadia Cenci, Dan Poulter, John Carnall, Eric Pickles, Robin Vickery, David Goldsmith, all take a bow you have helped deprive Ipswich residents of homes.

The leaflet also has a few other classics from Tory fantasy land – it tells us congestion in the town has become unbearable – forgetting to add that TORY run Suffolk has just wasted £20 million on ‘Travel Ipswich’ and to finish the leaflet off and to pretend they are community minded – they have a picture of the Whitehouse Skate Park – not surprising they forget to mention it was built with help from funding by the local Area Committee – the same committee they wanted to scrap!

If you want homes built for your families in Ipswich – Vote Labour not for the ‘Stalling Tories’
Posted by Alasdair Ross at 18:05