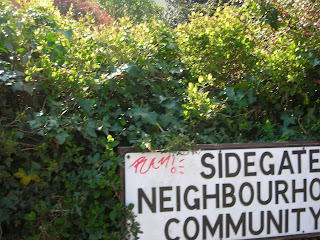 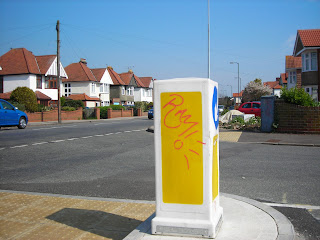 Whilst out delivering leaflets this morning I was shocked by the rise in locations where graffiti can be found, a whole fence has been covered in Aberdeen Way.In the lower end of Sidegate Lane there are six locations where graffiti has been sprayed. I will be supplying a list of the locations with a full set of photos to the Borough Council’s Streetcare Department and will demand that an urgent clean-up plan is started immediately.I’ll be checking progress regularly with Council staff to ensure that the graffiti I have found is tackled as quickly as possible and I’ll be reporting back to residents over the coming weeks.It’s quite clear that the Liberal Democrat and Tory run Council is losing the battle against graffiti, fly-posting and vandalism. It’s taken them months to sort out less than a dozen cable TV cabinets but it’s obvious from just Sidegate Lane that this is just the tip of the iceberg.It is obvious that this is becoming a serious matter within the whole town, in Westgate ward the Labour Councillor, Martin Cook has found over 150 locations where graffiti has been placed!

This has to stop now and the Council needs to turn back the tide before things get even worse. Unfortunately the focus on keeping the town clean has slipped since the Liberal Democrats and Tories wasted £106,000 on a failed attempt to privatise the Streetcare Department and started a programme of staff cutbacks.

The attached photos show a couple of places in Sidegate Lane where graffiti has been located.


You can report graffiti, fly-posting and litter using the Council’s Cleaner Ipswich Hotline on 01473 433000.
Posted by Alasdair Ross at 12:01

Good news after calling street care - we have seen the removal of some of the graffiti- from the bollards on sidegate avenue and aslo the school sign in Sidegate Lane. Graffiti still on the telephone/cable boxes-0 here the council can and should be using Labour Govt legislation to get BT/NTL and others to get rid of the messs.