Welcome to the new state of Humber Ducy Lane! 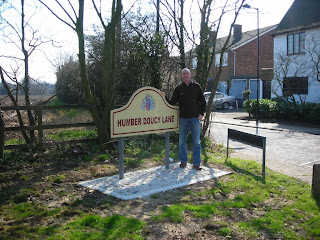 Busy day on the campaign trail, started with delivering some more mail in the roads near my house and then moved onto Humber Ducy Lane to deliver a leaflet about the stupid and expensive new street signs in the Bixley part of Humber Ducy Lane.
The leaflet was well received with a number of phone calls from residents who all agreed with me. The Tory council now states that the signs were to make the road have a more 'rural' feel! When I ask will the local fox hunt turn up to jump over them! To see how stupid the signs are just have a look at the picture at the top of this entry.
Whilst i was doing Humber Ducy Lane, John Mowles was delivering a leaflet for me in the Khartoum Road area and other members were also delivering targeted mail in the ward.
This evening it was back over to St Johns with the candidate Neil and Sandy Martin. Whilst knocking on doors a number of residents mentioned that they had seen local police walking around the locality- the first time in years. All due to the move back to local police stations part of a Labour Govt scheme. I have to mention that as today also saw the release of the Tory manifesto on their website (the first time their website has been updated since January). In their manifest they seem to be taking credit for a number of schemes that came about because of a Labour Govt or because they inherited them from a Labour Council!
Reason for the title? the Humber Ducy Lane signs- rather than give a rural feel it seems more like an East European border crossing - pre 1989!